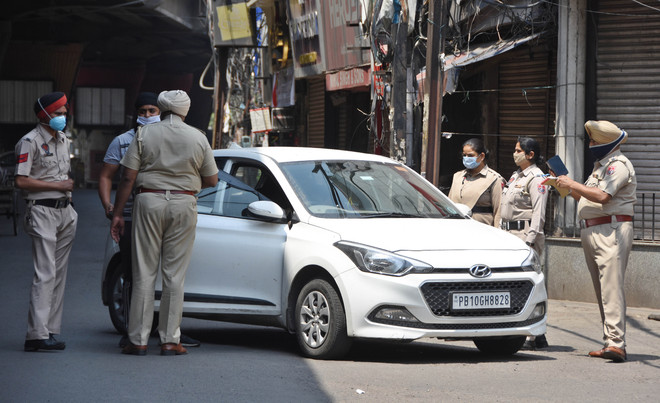 Despite the weekend lockdown, the city saw significant rush of people on roads. The police had to set up nakas at the each nook and corner of the city to catch the violators.

Many commuters were seen arguing with cops when they were stopped for checking at the nakas.

On Saturday afternoon, Kotwali SHO Harjit Singh had set up a naka at Clock Tower. Cops stopped a i20 car for checking in which four persons were travelling. When cops told them that a challan would be issued as only two persons were allowed to travel in a car, they started arguing with the police. They did not stop arguing even in the presence of ACP Waryam Singh.

“How can police challan us as we were going to get us vaccinated and getting vaccinated is also an emergency. Cops are harassing us. We all were wearing mask and following the Covid norms. See our Aadhar cards, we are not lying,” said a man.

SHO Harjit said occupants misbehaved with cops on duty without any logic and fail to provide any curfew pass or permission.

The police registered a case under Section 188 of the IPC against Jasmit Singh alias Harry, a resident of Hargobind Nagar.

Police officials said this was not the first case. Most commuters, who were stopped, tried to pressurise the cops on duty and indulged in arguments.

Meanwhile, most shopkeepers followed the weekend curfew timings and closed their shops before 12 noon. The police were also seen on roads asking a few shopkeepers to close their shops.