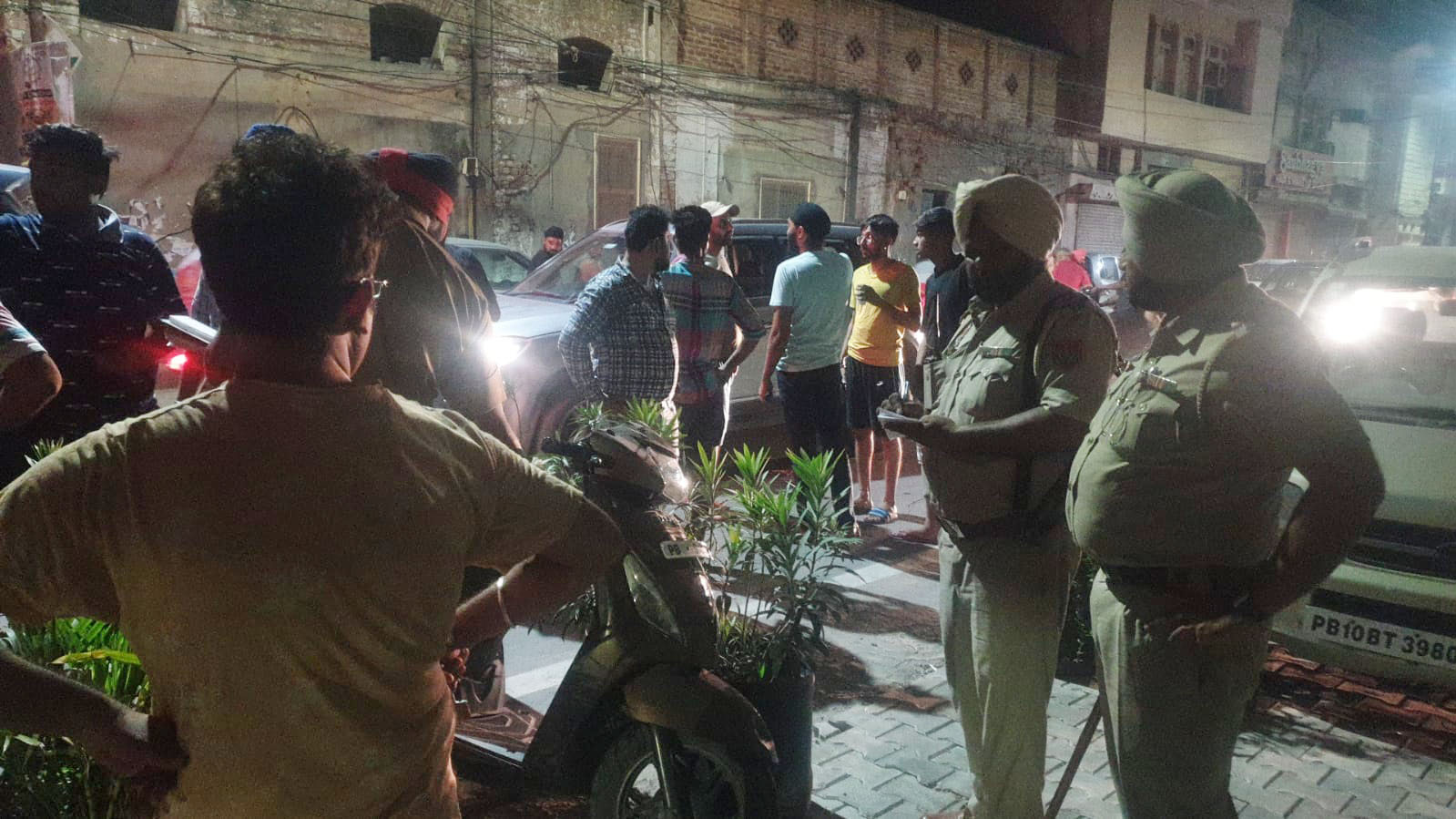 The police inspect the spot where the youth was shot at near Naulakha Garden colony in Ludhiana on Saturday. Tribune Photos

A 20-year-old youth was shot at by armed motorcycle-borne persons near Naulakha Garden colony here last night. Interestingly, the incident took place around 100 meters away from the Police Division 3.

The victim has been identified as Kartik Baggan, a resident of Ghati Balmiki.

ACP (Central) Harsimrat Chetra and SHO of the Police Division 3 Inspector Sukhdev Singh reached the spot after getting information.

When the assailants fired shots at my son, they were on a video call with notorious gangsters Shubham Mota and Rishav Banipal, who were lodged in the Ludhiana Central Jail. Kranti, father of the victim

The victim’s friend, Akshay, said Kartik, along with his family, had gone to pay obeisance at some religious place yesterday. Later, Kartik’s family went home and he, along with his friends, went for a walk. When he was crossing near the gate of Naulakha Garden, armed motorcycle-borne persons fired shots at him. He suffered one bullet injury near his stomach.

Area residents with the help of the victim’s friends shifted the injured person to the CMC Hospital, where his condition is stated to be stable now.

Kartik’s father Kranti alleged that when the assailants fired shots at his son, they were on a video call with notorious gangsters Shubham Mota and Rishav Banipal, who were lodged in the Ludhiana Central Jail. The assailants were also heard saying that they had taken the revenge.

“Criminals are having access to mobile phones inside the jail and they are sending their gang members to commit crime. Gangsters are also watching crime scene live from the jail. Action should be taken against jail officials for negligence,” alleged the victim’s father.

Area residents, who gathered at the spot after the incident, said Ludhiana city was witnessing cases of loot, murder and kidnapping daily. The Ludhiana Commissionerate had failed to nab these criminals. Robbers had even targeted Army personnel in the recent past.

ACP Harsimrat Chetra said preliminary probe suggested that there was no gang war of any sort. Rather, the victim, Kartik, had once thrashed one of the main suspects, Karan, and made his video. Now, Kartik was threatening him that he would make his video viral on the social media. To take revenge, Karan, along with his aides, fired shots at Kartik from a .32-bore pistol. “We are also probing the allegations of the victim’s father, who alleged the role of jailed gangsters behind the attack,” said the ACP.

The key accused, Karan Kalia, who along with his aides, attacked Kartik on Saturday night, uploaded a post on his Facebook profile claiming responsibility for firing. He stated that “Kartik thrashed me once and he also made my video. Now, he was threatening me to upload the video on the social media to defame me. I will surrender before the police soon”.