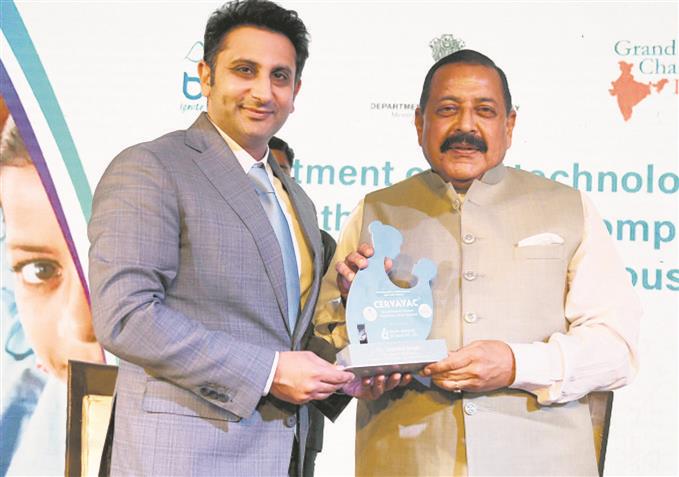 Will give to India first. We are gearing up to make 20 crore doses over two years. Adar Poonawalla, SII CEO

75,000 of them succumb to cancer annually

1/4th of all cervical cancer deaths in India

India accounts for one-fourth of all global deaths from the condition and 90 per cent mortality due to this cancer is in low and middle income countries.

A third major example of public-private partnership in vaccine development — after Rota virus and Covid vaccines — the qHPV shot has been developed by the Department of Biotechnology and the Serum Institute of India, Pune.

Adar Poonawalla, SII Chief Executive Officer, who was present on the occasion, said the shot would be available in a few months. “We will give it to the country first and the world later. It may be priced between Rs 200 and Rs 400, but the final prices will be fixed later. We are preparing to make 200 million doses in two years,” Poonawalla said.

The SII has pledged one crore doses to the government by the year-end for a possible inclusion of Cervavac in the national immunisation plan.

In July, the Drug Controller General of India had granted the vaccine market authorisation approval. Launching the shot today, Minister of State for Science and Technology Jitendra Singh said an affordable and safe vaccine marked an important day for the Department of Biotechnology and took India closer to the vision of Atmanirbhar Bharat.

The vaccine is significant as it targets high-risk HPV strains 16 and 18, which are responsible for 83% of all invasive cervical cancers in India and 70% worldwide.

An estimated 1.25 lakh Indian women are annually diagnosed with cervical cancer and over 75,000 die from the disease. “We are here to celebrate the script writers of this story of scientific discovery and self-reliance,” Singh said, praising biotechnology secretary Rajesh Gokhale and his team.

AIIMS obstetrics and gynaecology professor Neerja Bhatla, who has been involved with the vaccine development, said it was safe and effective with evidence from vaccine use in the UK and Nordic countries showing fast reduction in cancers. Bhatla called for administering the shot to boys too to prevent HPV-induced cancers and genital warts in them.