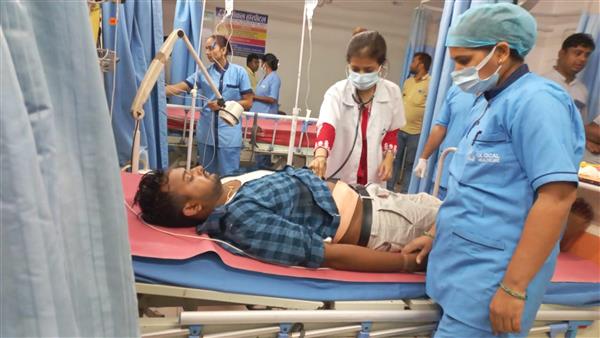 A man injured in Begusarai mass shooting receives treatment at a hospital. PTI

Seven police personnel in Bihar's Begusarai were suspended on Wednesday for the lapse in duty after two gunmen went on a rampage in the district, killing a man and critically injuring 11 people, a senior official said.

Additional Director General of Police (HQ) Jitendra Singh Gangwar said the police personnel were on patrolling duty and were suspended as they could not stop the two gunmen who went on a shooting spree in Begusarai on Tuesday.

A hunt is on to nab the two gunmen, who are yet to be identified, he said.

Those suspended were lower-rank police personnel, not above that of assistant sub-inspector.

Union Minister Giriraj Singh, the MP of Begusarai, alleged that whenever a 'Mahagathbandhan' government comes to power in Bihar, the law and order situation starts deteriorating.

"Chief Minister Nitish Kumar terms 'jungle raj' as 'janta raj', which is ridiculous. He is working under the pressure of the RJD leaders in the state," Singh said after reaching Patna.

He is scheduled to visit Begusarai later in the day.

A 30-year-old man, Chandan Kumar, was killed and 11 others critically injured as the two gunmen fired indiscriminately in crowded areas.