Polling begins for Phase 1 of UP elections : The Tribune India

Polling begins for Phase 1 of UP elections

Polling in 58 assembly seats in 11 districts 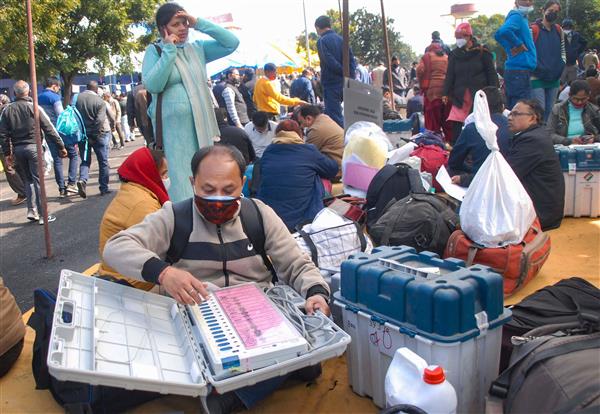 Polling officials check election material after collecting from a distribution centre, a day before the Uttar Pradesh Assembly elections, in Noida, on Wednesday, February 9, 2022. PTI

Polling began in the first of its seven-phase elections on Thursday.

As many as 58 assembly seats in 11 districts, most of them impacted by the farmers’ agitation, are going to the polls.

The polling started at 7 am to ensure Covid-safe polls.

In 2017, the BJP bagged all but five of the 58 seats and the Samajwadi Party and the BSP won two seats each.

The lone legislator who had won on the Rashtriya Lok Dal (RLD) ticket had crossed over to the BJP.

The campaigning in these constituencies gathered pace mainly towards the fag end due to the Election Commission’s earlier curbs on gathering and saw several instances of heckling of candidates from the BJP in villages dominated by Jats. The districts where the elections will be held are Shamli, Hapur, Gautam Buddh Nagar, Muzaffarnagar, Meerut, Baghpat, Ghaziabad, Bulandshahr, Aligarh, Mathura and Agra.

The fate of half a dozen Ministers will be at stake, including Shrikant Sharma, Suresh Rana, Sandeep Singh, Kapil Dev Agarwal, Atul Garg and Chowdhury Lakshmi Narain.

The BJP skirted the doubling of farmers’ income and stressed more on the alleged exodus of Hindus from Kairana after the Muzzafarnagar riots of 2013, the SP-RLD alliance attacked the UP government for the missed promises on creating jobs and farmers’ issues. Mayawati began the outreach last and has been stressing on her 2007-2012 government’s track record on law and order.

The Congress has led the charge under general secretary Priyanka Gandhi Vadra and generated interest by allocating 40 per cent of the seats to women candidates.