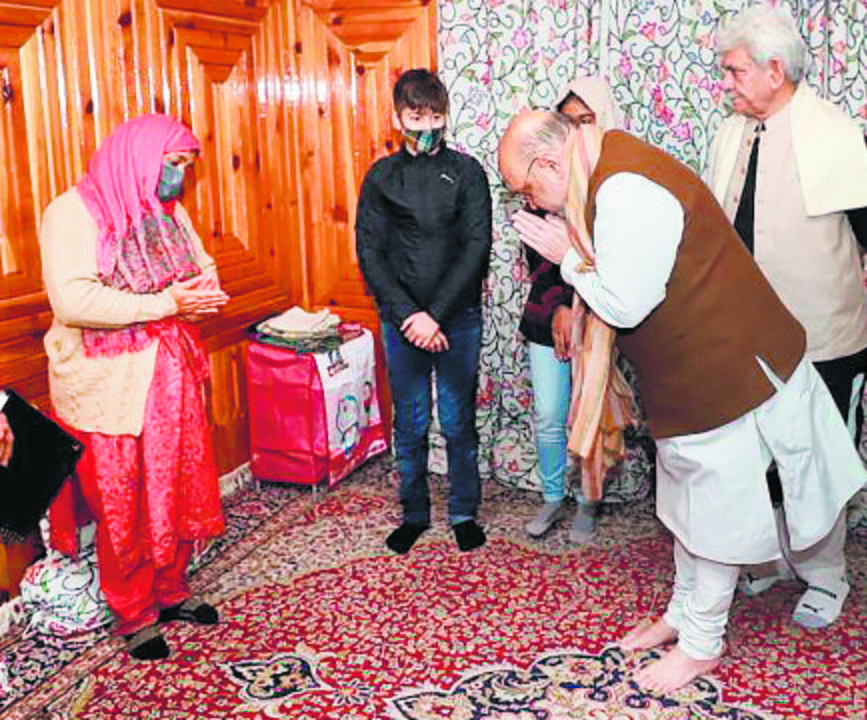 Union Home Minister Amit Shah arrived in Srinagar on Saturday, his first visit to Jammu and Kashmir after Article 370 was revoked in August 2019. He drove straight to meet the family of slain police Inspector Parvez Ahmad Dar, who was shot dead by terrorists in Nowgam on June 22.

Indian businessman Bansari Lal Arendeh, who was kidnapped at gunpoint in Kabul last month and then released, has returned to India. He was kidnapped in mid-Sept and released after 10 days. His release has been as mysterious as his kidnapping . He ran a modest business in Kabul for 2 decades that employed 10-15 Afghans at its peak. TNS

He also met the families of Makhan Lal Bindroo, a popular medical store owner, and school principal Supinder Kour, who were killed in the recent terror attacks.

He later chaired a meeting of the unified command where he is learnt to have sought answers on the prolonged encounters with terrorists, radicalisation, killing of civilians and increased cross-border infiltration. Shah’s posers came in the backdrop of a 13-day-long anti-terror operation by the Army and security forces, considered the longest and fiercest in recent times in which nine soldiers have died. The meeting was attended by top civil administration officials, the Lieutenant-Governor and senior officials of the Army, CRPF, police and other agencies. The security brass is learnt to have indicated the possibility of the terrorists being trained by Pakistan’s commandos. Sources said the security and Intelligence agencies expressed their views on why despite a massive buildup of forces and government’s extensive outreach efforts, the threat of radicalisation and home-grown terrorism was on the rise. As per government figures, 32 civilians have been killed so far this year while the total killings last year were 41. Also, there were 63 terrorist-initiated encounters till September this year.

A discussion was reportedly held on formulating a strategy to reassure people regarding their safety. “The recent killings have damaged the Centre’s narrative that J&K is safe for all,” the sources said. Pro-Pakistan voices in Kashmir also came up for discussion. It was pointed out that a counter-narrative appeared to have failed despite a series of raids and arrests by the NIA. Shah later flagged off the inaugural Srinagar-Sharjah flight.

WHO has named the variant Omicron