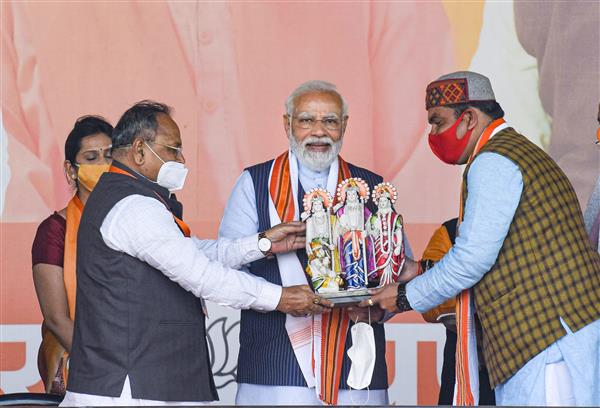 Prime Minister Narendra Modi receives a memento during a public meeting for the Uttar Pradesh Assembly elections, in Sitapur. PTI

Prime Minister Narendra Modi on Wednesday said people want to return the power to those who brought rule of law in Uttar Pradesh, and asserted that having a BJP government meant keeping rioters and “mafia raj” under control.

Addressing an election rally here, PM Modi said people in UP are saying only the BJP will come to power in the state, and cautioned that attempts were being made to divide them.

“Dangawadis’ (rioters) are trying to divide you. You should remain united and vote in large numbers,” he said, taking a swipe at the previous governments headed by rivals in the state.

Modi’s rally covered nine assembly segments of Sitapur district that will go to polls in the fourth phase on February 23.

The BSP ruled UP from 2007-12 after which Samajwadi Party came to power under Akhilesh Yadav which was succeeded by the Yogi Adityanath government in 2017.

He said taking inspiration from Sant Ravidas, his government is running on the mantra of “Sabka Saath, Sabka Vikas, Sabka Vishwas and Sabka Prayas”.

“At the heart of our schemes is the welfare of the downtrodden, oppressed, backward and deprived. It is also a double pleasure for me that I am the MP of Kashi, where Sant Ravidas ji was born.

“I am fortunate that the work of beautification of his temple complex in Varanasi was done through me,” he said on a day the country was observing the mystic poet and reformer’s birth anniversary.

Modi accused the previous governments in UP of being dynasts and said the poor’s ration, which the mafia used to loot earlier, is now reaching their house.

“A BJP government in UP means freedom to celebrate festivals as well as safety of sisters and daughters. Our government here means continuous work for the welfare of the poor and double speed work on central schemes,” he said.

He said they aimed to make Uttar Pradesh the ‘Uttam Pradesh” (best state).

Noting that his government worked during Covid period, Modi said. “In this time of Covid, our government also took care to provide free vaccines to the poor.” Such a campaign was never run in earlier governments to administer any free vaccine to the poor, he said.

Modi said the condition was that the vaccination programmes of the earlier governments could not even reach the village and tribal areas.

PM Modi said the Covid vaccine was free of cost and they did not have to pay a single penny for it.

He said the cost of the Covid vaccine is very high abroad.

For the BJP government, the life of our countrymen is more valuable. We will let our coffers become empty but we will provide vaccines to all, he said.

“We did this as we care of poor, dalit and the downtrodden. Our government is spending thousands of crores on this. During the pandemic, Ayushman Bharat benefited people a lot,” Modi said.

Terming the toilets constructed by his government as ‘Izzat Ghars’, Modi said, “The poor mothers, sisters and daughters wanted freedom from suffering and the humiliation of open defecation.

The BJP government has removed the biggest problem of their lives by constructing toilets in more than two crore homes in UP, he added.

He added that LED bulbs are now available at Rs 50-60 which also reduced electricity bills.

“People of UP save thousands of crores in their bills,” he said.

In 10 years (2007-17), less than 2 lakh jobs were provided in UP but in the past five years of Yogi Adityanath government, 4.5 lakh government jobs were given.

During earlier regimes “mining and land mafia” ruled the roost, PM said, adding that in Sitapur, the condition of the famous Naimisharanya temple was known to all. The temple is being developed now, he said.

The PM also mentioned the famous Eye hospital of Sitapur, saying that he heard about it in his childhood in his village in Gujarat.