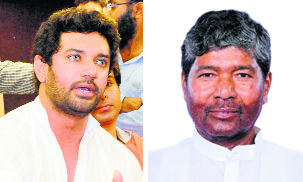 Four of the six LJP MPs on Monday elected Paras as their leader and met Speaker Om Birla, who accepted their proposal.

Sources said it was Nitish Kumar’s two associates — party MP Rajiv Ranjan (Lalan Singh) and Deputy Speaker of Bihar Assembly Maheswar Hazari — who ensured that the four LJP members rallied behind Paras. A senior leader said Nitish was unhappy with Chirag for having fielded candidates only against the JD(U) during the 2020 Assembly polls, which cost the party 30 seats.

Addressing the media, Paras lauded Nitish Kumar as “vikas purush”. He claimed that most LJP workers were unhappy with the turn of events in Bihar during the Assembly elections. He also said the LJP would continue to be part of the BJP-led NDA and that “Chirag can remain a part of the party.”