Who did you leave four seats for? Didi asks Shah 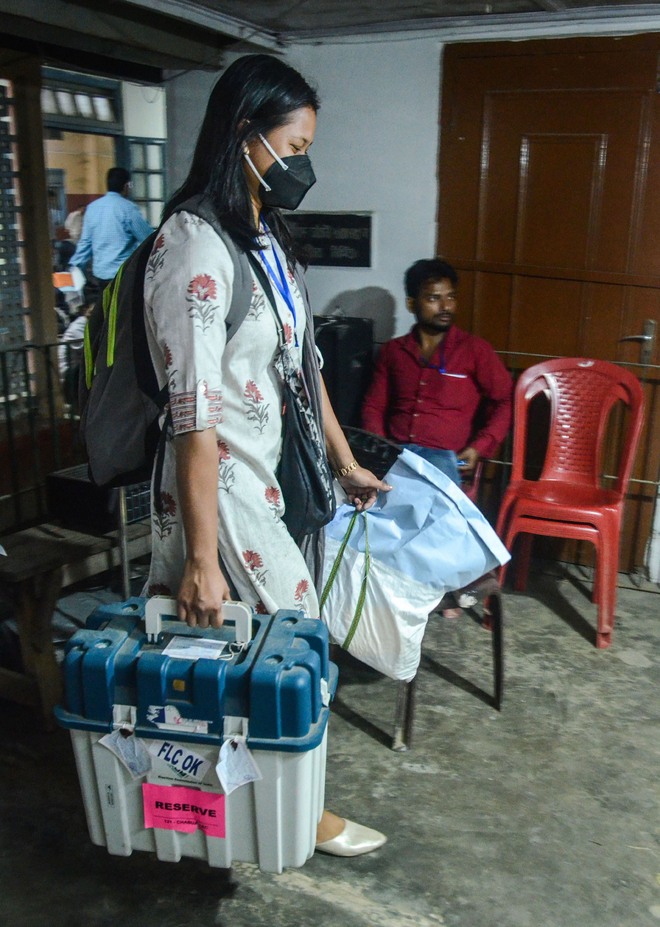 A poll official carries an EVM to the strongroom in Dibrugarh. PTI

The TMC and Congress on Sunday hit back at the BJP for making poll predictions in violation of the election laws, with the latter petitioning the Election Commission for FIRs against the BJP top brass.

Hours after Home Minister Amit Shah claimed that the BJP would win 26 of the 30 seats in Bengal and 37 of the 47 in Assam, West Bengal Chief Minister Mamata Banerjee took a swipe at the BJP asking, “Why did Shah not claim all 30 seats? Has he left four for the CPM and the Congress?”

While Mamata said counting of votes would take place on May 2, the Congress in a memorandum to the Election Commission cited the front page newspaper advertisement by the BJP in Assam, claiming victory in the first phase of polls held yesterday and demanded FIRs against BJP chief JP Nadda, Assam Chief Minister Sarbananda Sonowal and state unit president of the BJP Ranjeet Dass for violating the EC orders, Model Code of Conduct and the Representation of People’s Act-1951.

“In a pre-planned conspiracy and to defraud the voters of Assam, Sonowal, Nadda, Dass and other BJP members willfully and knowingly issued advertisements camouflaged as political predictions as headlines on the front page of various newspapers throughout Assam. We urge the EC to take action as may be necessary and required in law, including direction for registration of offences against Sonowal, Nadda and Dass for the blatant violation of Model Code of Conduct and the RPA 1951,” Congress leaders Randeep Surjewala, Mukul Wasnik and Ajay Maken said to the EC.

In Bengal, Banerjee said high voter turnout was a sign that the people had voted for the TMC.

“Try your seat prediction stunts at the Gujarat Gymkhana. This is Bengal. #KhelaHobe,” Brien said.