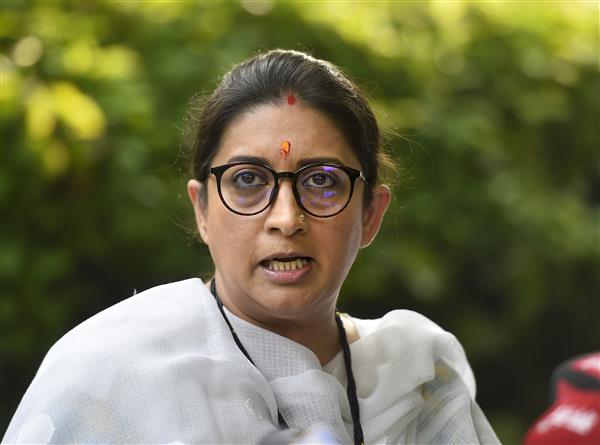 Union Minister Smriti Irani during a press conference at her residence in New Delhi. PTI file

The Delhi High Court on Friday directed Congress leaders Jairam Ramesh, Pawan Khera and Netta D’Souza to remove ‘defamatory’ tweets, re-tweets, posts, videos and photos from social media in relation to the allegations made against Union Minister Smriti Irani and her daughter.

Justice Mini Pushkarna also issued summonses to the three Congress leaders on a civil defamation suit filed by Irani seeking damages of over Rs 2 crore for allegedly making baseless allegations against the Union Minister and her daughter Zoish Irani.

In case the defendant Congress leaders failed to comply with its directions in 24 hours, social media platforms Twitter, Facebook and YouTube shall take down the material, the High Court ordered.

Irani, who represents Amethi constituency in the Lok Sabha—is holding the portfolios of Ministry of Women and Child Development and Ministry of Minority Affairs in the Union Cabinet. She filed a defamation suit in the Delhi High Court after the Congress leaders alleged that her 18-year-old daughter Zoish ran an illegal bar in Goa. They had also targeted the minister over the allegations and had demanded her sacking from the Union Cabinet.

The Congress said it will contest Irani’s defamation suit over alleged illegalities in the operations of a Goa bar run by the minister’s daughter—a charge she has termed malicious and motivated.

“The Delhi High Court has issued notice asking us to formally reply to the case filed by Smriti Irani. We look forward to presenting the facts before the court. We will challenge and disprove the spin being put out by Ms. Irani,” AICC communications chief Jairam Ramesh said on Friday. (With PTI inputs)