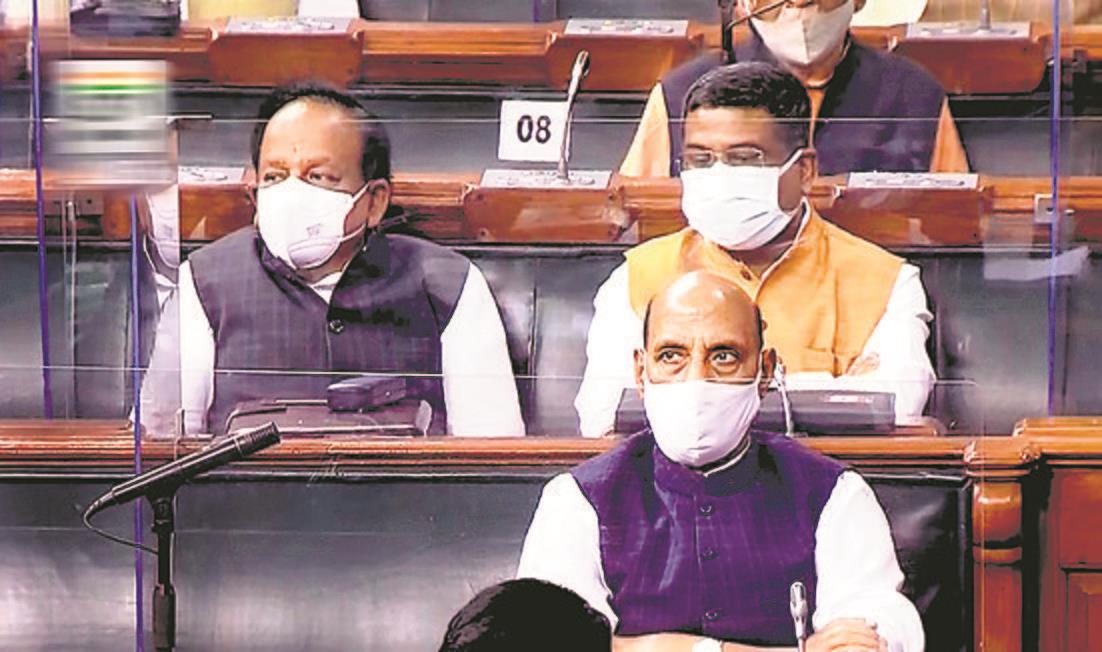 Union Ministers Rajnath Singh, Harsh Vardhan and Dharmendra Pradhan during the Budget session in the Lok Sabha on Monday. PTI

The ongoing Budget session of Parliament could be adjourned on March 26 after several political party leaders urged the presiding officers of the Lok Sabha and Rajya Sabha to curtail the session in the wake of state elections commencing from March 27.

Campaigning for elections in West Bengal, Assam, Kerala, Tamil Nadu and Puducherry is underway with most MPs away canvassing.

Nearly 145 MPs have written to the Lok Sabha Speaker at separate times to seek session curtailment so have leaders of Trinamool Congress, DMK, Left parties and Congress. The session is otherwise scheduled to end on April 8.

The demand for curtailment was again raised at the business advisory committee meetings of the Lok Sabha and Rajya Sabha chaired by Speaker Om Birla and Chairman M Venkaiah Naidu, respectively today. Both House Chairmen said they would consider the issue appropriately.

The main government business is the Finance Bill and demand for grants for ministries which can be covered in the first two weeks.

The Rajya Sabha business advisory panel today decided to debate budgets for Agriculture Ministry, railways, tourism, tribal affairs, jal shakti and food processing, while demand for grants for all other ministries would be clubbed for passage.

Earlier today, Trinamool Congress leaders wrote to Birla and Naidu asking for adjournment of the session.

In his letter to Naidu, TMC leader in Rajya Sabha Derek O’ Brien said, “We urge you to consider the adjournment of the ensuing Parliament session, because of the declaration of elections in five states. Due to the ongoing intensive election preparations in the state, the MPs from the Trinamool Congress would find it difficult to attend the second part of the Budget session.”

Brien cited two precedents, where under the Parliament sessions were adjourned in view of upcoming polls in multiple states.