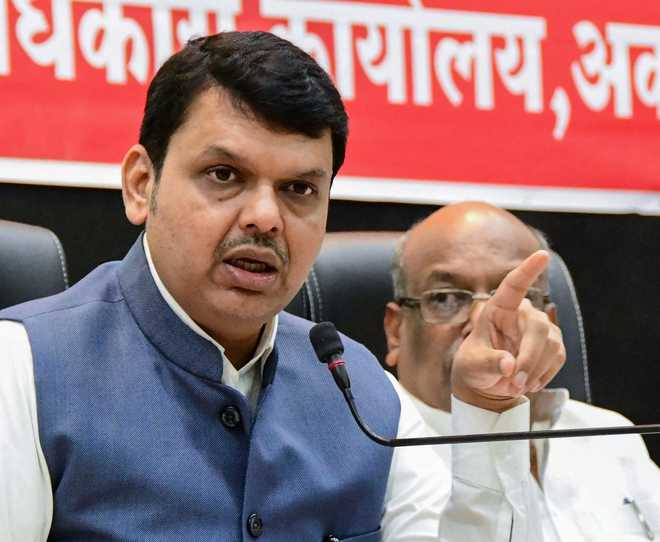 An innocuous tweet by BJP's Leader of Opposition Devendra Fadnavis taking a swipe at the Maharashtra government on the Mumbai Metro, ignited another war of words in the state on Thursday.

Late on Wednesday, Fadnavis took a ride on the Delhi Metro, and posted his photos with a mocking comment on Twitter targeting the Maha Vikas Aghadi (MVA) alliance government back home.

"I travelled in Delhi Metro today to return back to the airport and reached in a very short span as compared to travel by road!" Fadnavis tweeted.

He added: "Don't know when will I be able to travel in Mumbai Metro 3 to the airport, looking at the things messed up by the MVA on car shed issues." The sarcasm was not lost on the ruling MVA partners - Shiv Sena, Nationalist Congress Party, and Congress which hit back vigorously and unitedly.

Maharashtra Congress spokesperson Sachin Sawant said he was glad that Fadnavis appreciated the "Delhi Metro, developed by the Congress government."

"The only metro (in Mumbai) completed was also by the (erstwhile Congress-NCP) government. Your government could not meet 2019 deadline," Sawant said.

The Congress leader assured that with vast experience in governance, "the MVA will surely do what your (BJP-led Fadnavis government) could not, if the hurdles created by Prime Minister Narendra Modi's government are removed." Chief Minister Uddhav Thackeray's media advisor Harshal Pradhan cajoled Fadnavis to "feel proud of Maharashtra first" before lavishing praise on others.

"You should feel proud that India's best CM (Thackeray) has saved and given a forest to Mumbai in Aarey Colony. We are a growing state with a visionary leadership. Be proud of the fastest developing state," Pradhan suggested.

Turning the tables on the opposition, NCP spokesperson Mahesh Tapase asked Fadnavis to help clear the obstacles allegedly created in the Mumbai Metro project by the BJP at the Centre.

"We want that these hurdles should be cleared, the state and Centre must jointly contribute to give a well-deserved Metro project to the citizens of Mumbai," urged Tapase.

In an oblique reference to Fadnavis' remarks, Deputy Chief Minister Ajit Pawar assured that "the work on Mumbai Metro is proceeding satisfactorily" as per schedules.

Environmentalist Zoru Bhathena, crusading for the protection of the Aarey Colony forests, had a poser for Fadnavis: "Did you find any Metro depots being built in the city forests inside Delhi".

Bhathena's query pertained to the MVA-BJP state-Centre tug-of-war over the location of the proposed Mumbai Metro car shed at Aarey Colony - now declared a 'forest' - or at the new Kanjurmarg site, a few kilometres away.

The BJP and Fadnavis are keen to retain the site at Aarey Colony, while the MVA wants to take it to the Kanjurmarg site, which has now been claimed by the Centre, and failing this, the MVA is eyeing a site in Bandra Kurla Complex where the proposed Bullet Train terminus is planned, giving palpitations to many.

Hammering Fadnavis on this, Sawant said: "It was your government that messed up by doing a deal with Shapoorji Pallonji builders. It was your government that favoured private builders over a public metro. If you want to look for someone to blame for this mess, do look into the mirror." The CM's aide Pradhan added that actually Fadnavis should feel "sad" that he missed the opportunity to be a part of the golden era of Maharashtra especially since "the Sena and Thackeray were once in alliance with BJP".