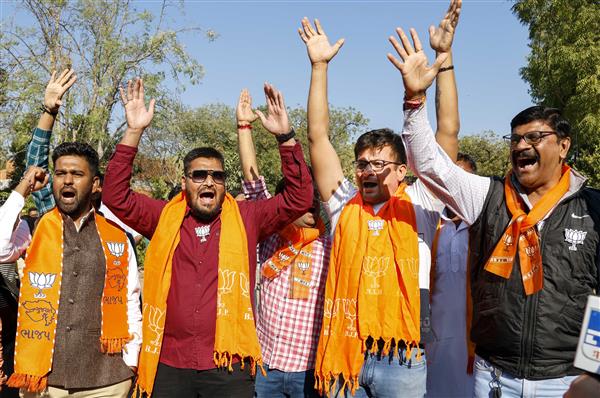 As the BJP was on Thursday seen inching towards all-time high tally of 150 seats in the 182-member Gujarat Assembly, the saffron outfit termed it as a reflection of its development agenda and a defeat of the Congress's "negative politics".

BJP workers danced in joy as the saffron camp went into a festive mood as trends reflected the BJP was all set to return to power for the record seventh term in Gujarat.

Hundreds of BJP workers thronged the party office in capital Gandhinagar as they danced and distributed sweets outside the state party headquarters, as senior leaders started pouring in.

On the Congress's dismal performance, Vyas said, "The Congress should learn its lessons now as negative politics won't take them anywhere. The Congress has been wiped out by the masses from the state," he said.

Commenting on the new poll entrant Aam Aadmi Party, which was leading in seven seats, Vyas said the AAP's presence was limited to only social media and a section of the urban population.