India orders surveillance of all passengers who came from or transited through UK in past 4 weeks : The Tribune India 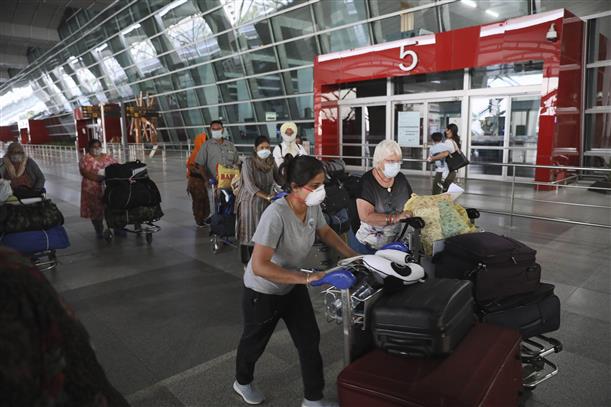 Photo for representation only. AP/PTI file

India on Tuesday ordered surveillance of all passengers who travelled from or transited through the UK in the last four weeks and laid down protocols for testing and isolation.

The new set of Standard Operating Procedure (SOP) issued by the Health Ministry describes the activities to be undertaken at the point of entry and in the community for all international passengers who have travelled from or transited through the UK in the past 4 weeks (from November 25 to December 23).

All international travellers as described above will be required to declare as per existing procedure their travel history (of past 14 days) and fill up the Self Declaration Form to be screened for Covid.

“All passengers coming from the UK during the period from December 21 to 23 shall be subjected to the following process:

Respective state governments shall ensure that all passengers travelling from or transiting through airports in the UK and disembarking in India would be subjected to RT-PCR test on arrival. In case of a positive sample, it is recommended that spike gene-based RT-PCR test should also be performed by an appropriate laboratory,” the SOPs say.

Passengers testing positive shall be isolated in an institutional isolation facility in a separate (isolation) unit coordinated by the respective state health authorities. If the report of the sequencing is consistent with the current SARS-CoV-2 virus genome circulating in the country; the ongoing treatment protocol, including home isolation/treatment at facility level as per case severity, may be followed but if the genomic sequencing indicates the presence of new variant of SARS-CoV-2 (reported by the UK) then the patient will continue to remain in a separate isolation unit.

The patient shall be tested on 14th day, after having tested positive in the initial test.

In case the sample is found positive on the 14th day, further sample may be taken until his two consecutive samples taken 24 hours apart are tested negative.

Those who are found negative on testing with RT-PCR at the airport would be advised quarantine at home.

Surveillance Programme (IDSP) so that this data would be provided to the surveillance teams.

Importantly, all the contacts (without any exception) of those travellers who arrived at various airports on December 21-23 and tested positive would be subjected to institutional quarantine in separate quarantine centres and would be tested as per ICMR guidelines.

Contacts of the suspect case have been defined as co-passengers seated in the same row, three rows in front and three rows behind along with identified cabin crew.

Even names of those found RT-PCR negative at airport testing shall be shared with the respective states by the central unit of IDSP and advised for quarantine at home and tested as per ICMR guidelines.

Those international travellers from the UK who arrived in India from November 25 to December 8 (1st and 2nd week from November 25) will be contacted by District Surveillance Officers and advised to self-monitor their health. If anyone amongst them develops symptoms, they will be tested by RT PCR and subjected to the protocols as stated in the SOP.

“The list of international travellers who arrived in India, as described in the scope above, between December 9 to 23 (3rd and 4th week) will be shared with respective state and District Surveillance Officers for daily follow-up till 14 days after their arrival in India.

These passengers will receive daily calls or visit from state health officials to ask about their health status for the day.

“You are requested to self-monitor for development of symptoms suggestive of Covid, ie, fever, cough, difficulty in breathing for 28 days from the date of arrival from the UK.

For all the above travellers, District Surveillance Officer shall facilitate testing (irrespective of previous testing at the place of origin or at the airport of arrival) with RT-PCR.

“In case the passengers have moved to locations outside the city of arrival, intimation should be sent to the district/state concerned for needful as above,” SOPs say.

Those who test positive shall be isolated in an institutional isolation facility in a separate (isolation) unit by the respective state health authorities and tested as per new protocols issued keeping the mutated UK strain in mind.

The Centre said a new variant of SARS-CoV 2 virus [Variant Under Investigation (VUI)-20212/01] has been reported by the Government of United Kingdom (UK) to World Health Organisation (WHO).

“This variant is estimated by European Centre for Disease Control (ECDC) to be more transmissible and affecting younger population. This variant is defined by a set of 17 changes or mutations. One of the most significant is an N501Y mutation in the spike protein that the virus uses to bind to the human ACE2 receptor. Changes in this part of the spike protein may result in the virus becoming more infectious and spreading more easily between people,” notes the new SOP.