France, Italy, Russia too do not subscribe to boycott call 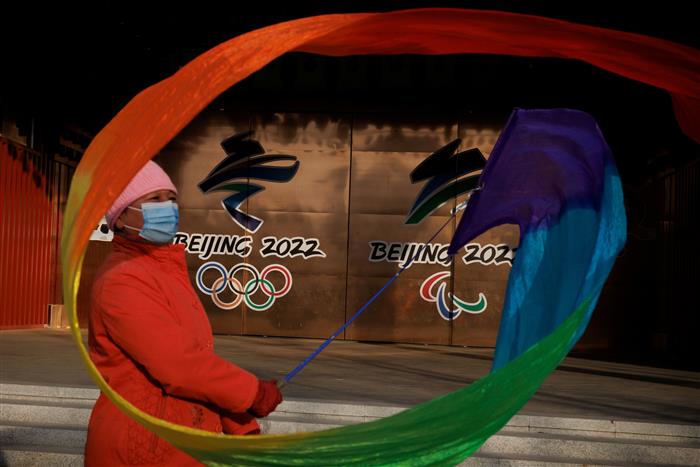 A woman flies a ribbon near the logos of the Beijing 2022 Olympic and Paralympic Games in a park in Beijing. Reuters

India and the US are making common cause at the Joe Biden-hosted virtual Democracy Summit that began on Thursday but there was dissonance in their stands on the Beijing 2022 Winter Olympics and Paralympic Games.

Biden had called for a political boycott of China two days back which has been endorsed by Canada, the UK, Australia and a clutch of smaller countries, some of which hedged the non-representation by pointing out that one reason was the Covid scare.

France and Italy were among the bigger western countries that will send both athletes and government representatives for the event. “Sports is a world apart that needs to be protected from political interference. If not, things can get out of control and it could end up killing all of the competitions,” said the French Sports Minister Jean-Michel Blanquer. On the other hand, Germany has left the question open so far.

At the same time, the boycott camp has made it clear that their athletes will participate under the country flag but there will not be any “diplomatic representatives”.

While the Biden administration will not send any diplomatic or official representation due to China’s “ongoing genocide and crimes against humanity in Xinjiang and other human rights abuses”, India on November 26 supported China’s hosting of the 2022 Winter Olympic and Paralympic Games though the Republicans led by former US Secretary of State Mike Pompeo had already started calling for a political boycott.

New Delhi had announced its support along with that of Moscow at the virtual meeting of the Russia-India-China Foreign Ministers.

Along with Australia, Canada, the UK and the US, Kosovo and New Zealand also expressed similar intentions. But New Zealand Deputy PM Grant Robertson said there was “a range of factors” and it was “mostly to do with Covid”.

India’s support is mainly symbolic and its biggest team at the Winter Olympics has been of four athletes. This time, a skier from Kashmir, Arif Khan, is the sole qualifier.