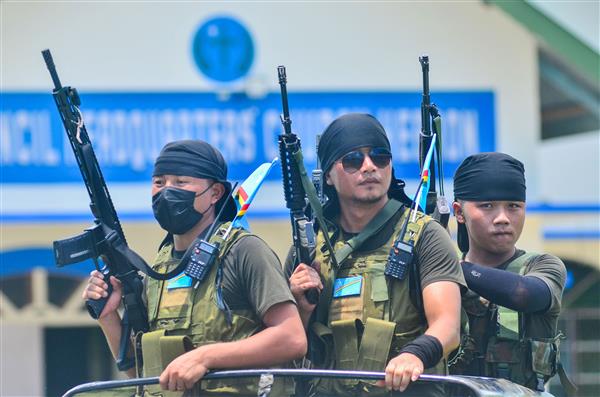 National Socialist Council of Nagalim-Isak Muivah personnel at Hebron, on the outskirts of Dimapur. PTI

The NSCN(IM) on Sunday said under no circumstances it would forego the demand for a separate flag and ‘Yehzabo’ (constitution) to achieve a final solution to the vexed Naga political issue.

The Isak-Muivah faction of the National Socialist Council of Nagalim (NSCN-IM), which is holding peace talks with the government for over two decades, said it attaches great importance to the Naga flag and constitution as part of the solution.

“Thus, the NSCN(IM) affirmed that under no circumstances it can forego these core issues that symbolised the Naga national identity,” the organisation said in a statement.

The NSCN(IM) and the Centre signed a framework agreement in 2015 to find a solution to the political issue.

The framework agreement came after over 80 rounds of negotiations spanning 18 years, with the first breakthrough in 1997 when the ceasefire agreement was sealed after decades of insurgency in Nagaland which started soon after Independence in 1947.

The union government has also been holding a separate parley with Naga National Political Groups (NNPGs) comprising seven organisations since 2017.

However, the final solution is yet to see the light of the day mainly because of the unwillingness of the government to accept the NSCN(IM)’s persistent demand for a separate flag and constitution.

“Time and again the NSCN(IM) has taken the resolute stand that it shall never deviate from the Naga national principle at any cost,” the outfit said in the statement.