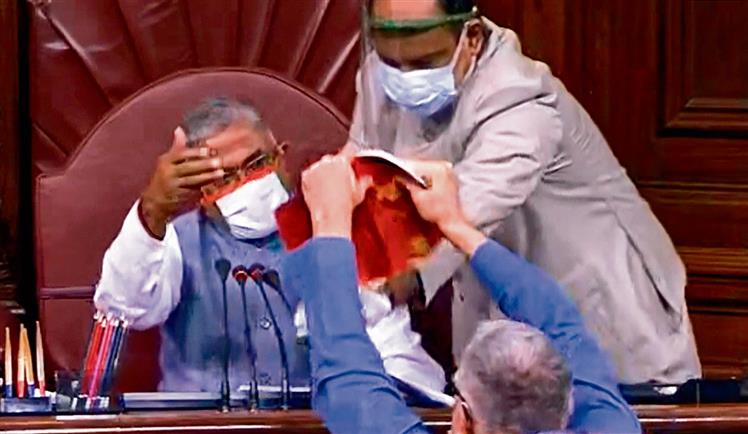 Trinamool Congress MP Derek O’Brien tries to tear the rule book amid ruckus in the Rajya Sabha over farm Bills even as Deputy Chairman Harivansh Narayan Singh urges him to return to his seat. PTI

The Rajya Sabha today cleared two farm Bills amid bedlam as Opposition members charged towards the Chairman’s podium, tore official papers and heckled Deputy Chairman Harivansh Narayan Singh while he was presiding over the proceedings. The security staff had to step in to prevent any harm to the presiding officer.

Opposition members entered the Well and raised slogans, leading to adjournment of the House for 15 minutes. They also tried to tamper with the microphone on the Chairman’s table.

No division of votes, oppn-sponsored motions negated by voice vote

The House is bound to see further confrontation with 12 Opposition parties giving a notice of no confidence in the Deputy Chairman and the government discussing a possible counter-motion against MPs who “misbehaved” with the Chair. Ministers are learnt to have briefed the PM on the issue.

A watershed moment in history of Indian agriculture! Congratulations to our hardworking farmers... MSP system will remain. Govt procurement will continue... We will do everything possible to support them and ensure a better life for their coming generations.

The Opposition notice signed by Ghulam Nabi Azad, Ahmed Patel, Derek O’Brien, Ram Gopal Yadav among others accuses the Deputy Chairman of “violating all canons of law, precedence, parliamentary practice and fair play”. It alleges the Deputy Chairman did not allow points or order to be raised, didn’t allow many MPs opposing the “anti-farmer Bills” to even speak; and purported to extend the RS beyond 1 pm without seeking consensus of the House.

The government motion could seek to name or censure Opposition MPs, including TMC’s Derek O’Brien who was caught on camera trying to pull off Chairman’s mic and tearing the rule book.

Farmers grow gold, but the Modi govt’s arrogance is making them shed tears of blood. Democracy has been shamed by the manner in which govt passed death warrants against farmers in the form of farm Bills. Modi ji is making farmers slaves of capitalists.

Protest erupted after the Chair turned down the Opposition’s suggestion of not extending the House timing to allow passage of the Bills. Leader of Opposition Ghulam Nabi Azad said the extension should be allowed only if there was a consensus.

Later, the Upper House passed the Farmers’ Produce Trade and Commerce (Promotion and Facilitation) Bill-2020 and the Farmers (Empowerment and Protection) Agreement of Price Assurance and Farm Services Bill-2020 through voice vote. The amendments moved by the Opposition benches were rejected.

Agriculture Minister Narendra Singh Tomar said, “The Bills will emancipate farmers from the constraint of disposing of their produce at only designated ‘mandis’ under the APMC Acts of states.” He allayed apprehension about the MSP regime getting scrapped, saying PM Modi had already made a statement in that regard. These Bills were not related to MSP. The procurement would continue and the “mandis” established under various state APMC laws would continue to function, he said.

You have numbers to have your way and we have the right to have our say and to keep you on track of democracy... dangerous trend we are following... I am going to move select committee. The committee is not a hand break, but it’s there to contribute... government promised two crore jobs every year. Now, you have the highest unemployment. Your credibility is low to make promises.

Describing the Bills as historic, he said these would revolutionise the agri-sector, bring transparency and give fillip to electronic trading.

SAD’s Naresh Gujral rejected the Bills in their present form and urged that these be referred to the House’s select committee. “Punjab people have historically fought against injustices in the past, including against the Congress, and would continue to do so against any anomaly,” he said in Punjabi. He, however, said the NDA had done more for farmers during its six years of rule than the Congress-led UPA.

Chandigarh: The SAD president, Sukhbir Singh Badal, on Sunday urged President Ram Nath Kovind not to accord approval to the two farm Bills passed by Parliament. “I beseech you to stand by the beleaguered and toiling farmers, farm and mandi labourers and Dalits in their hour of need.

“They are facing exploitation and look up to you to exercise your discretion as the highest executive in the country and come to their rescue by not signing these Bills so that they do not become an Act, ” he said.

Requesting the President to return the Bills for reconsideration, he sought an appointment with him. —TNS