A corona kit consisting of the three medicines - Coronil, Shwasari and Anu Tel

Yoga guru Ramdev's herbal medicine company Patanjali Ayurved on Tuesday claimed to have discovered a cure for coronavirus but no medical authority could immediately vouch for the claim of 'Coronil and Swasari' medicine curing the highly contagious disease within seven days.

The firm claimed that the two Ayurved-based medicines have shown 100 per cent favourable results during clinical trials on COVID-19 infected patients except those on a life support system.

The medicines have been developed by Patanjali Research Center, Haridwar and privately-owned National Institute of Medical Science, Jaipur following all protocols with clinically controlled trial-based evidence, Ramdev told PTI in a telephonic interaction with PTI.

Sidestepping questions on the drug being approved by government agencies such as ICMR, Ramdev said clinical controlled study of these medicines was done in several cities including Delhi, Ahmedabad and Meerut and the RCT (Randomized Clinical Trial) controlled with placebo were conducted at Jaipur-based National Institute of Medical Sciences & Research.

"This was done after getting approval from Clinical Trial Registry of India (CTRI) and all other required formalities," he said.

"We have followed all the parameters set up by modern science for such clinical trials."

Both the Ministry of Ayush and the Indian Council of Medical Research (ICMR) have reportedly refused to comment on the claim citing lack of knowledge of the issue.

A government notification bars companies from advertising a cure without government approval.

Ramdev claimed that his ayurvedic drugs have shown 100 per cent favourable results during the clinical trial.

At a launch press conference in Haridwar, he said, "The whole country and the world was waiting for the medicine or vaccine for coronavirus. We are proud to announce that the first ayurvedic, clinically controlled trial based evidence and research-based medicine has been prepared by the combined efforts of Patanjali Research Centre and National Institute of Medical Sciences (NIMS)". 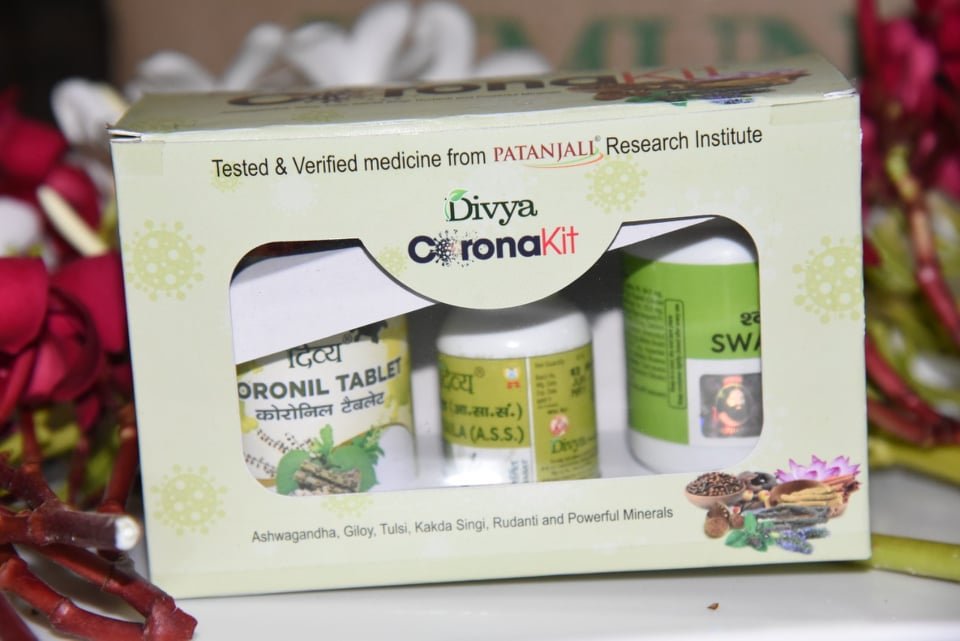 According to him, this medicine is useful for prevention from COVID-19 and also for treatment.

He claimed that no infected patient lost his life during the trial.

Ramdev also claimed that during the trial other complications of patients were also cured and their critical parameters were normalised.

"Even parameters as hsCRP and IL-6 levels were also controlled during the trials," he added.

The test has been done on all kinds of patients except those who are highly infected and are on life support systems as ventilators.

"Trials on the infected people who are on a Ventilation support system are still due," he said adding that the trial has been conducted only on a normal infected person and persons with medium infections.

Ramdev further claimed, "severely infected patients, which are on a life support system, can also be cured by this medicine but trials for such cases are due in the second stage."Patanjali had started to work on corona medicines in December 2019.

The Corona kit, priced at Rs 545, would be available pan India within a week. The kit will have medicines for 30 days.

This is not an immunity booster but a coronavirus cure, Ramdev said.

Manufactured by Haridwar-based Divya Pharmacy and Patanjali Ayurved Ltd, the medicine is the result of a research partnership between Patanjali Research Institute and the Jaipur based National Institute of Medical Sciences.

Ramdev said the medicines can be ordered online through a mobile app from next Monday.

The COVID-19 therapy suggested by Patanjali is applicable for adults ranging between 15-80 years of age whereas children are advised to take half the dosage prescribed for adults.

Patanjali's anti-COVID tablet, Divya Coronil Tablet consists of Giloy, Tulsi and Ashwagandha and is prescribed to be taken thrice a day with hot water 30 minutes after breakfast, lunch and dinner.

Medical experts, however, were not convinced by the claims made by Yoga guru Ramdev's Patanjali.

Dr Ravi Shekhar Jha, Head of the department and senior consultant, Pulmonology, Fortis Escorts Hospital, Faridabad, said physiologically it is quite impossible that there is any medicine which can finish the viral load from the body in 5-7 days.

"These claims can be very harmful because people, instead of taking actual medical help, may start rushing to these kinds of claims which have no proven clinical trial," he told PTI.

Instead of taking actual medical help, opting for a "desi nuskha" kind of a thing is just going to result in loss of precious time in curing the disease, Jha said.

Noted city-based lung surgeon Dr Arvind Kumar said only a proper clinical trial can prove the efficacy of the medicine.

Haridwar-based Patanjali group has an estimated turnover of around Rs 10,500 crore. It had acquired debt-ridden Ruchi Soya in a corporate insolvency resolution process for around Rs 4,350 crore after competing with Adani Group.

The group is also known for venturing in uncharted areas as it had in August 2018 launched a messaging app 'Kimbho', which could not take up well and is now defunct. PTI