Spike in oil price is breaking India's back: Jaishankar in US : The Tribune India

Spike in oil price is breaking India's back: Jaishankar in US

‘We have concerns about the price of oil but we are a USD 2,000 per capita economy’ 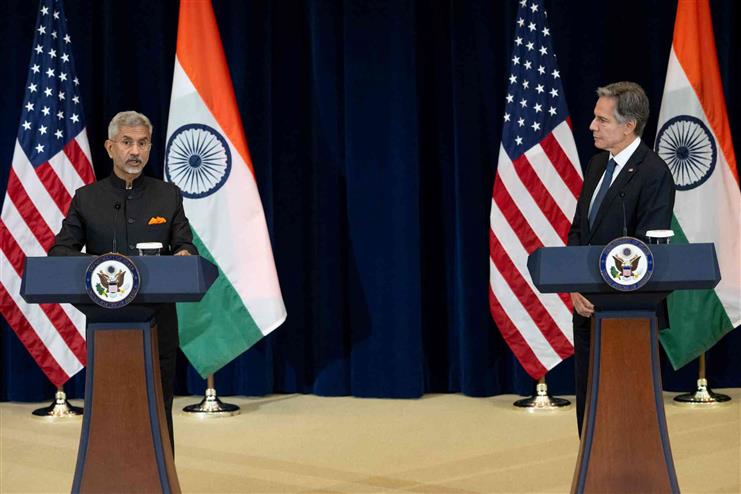 US Secretary of State Antony Blinken and India's Foreign Minister Subrahmanyam Jaishankar hold a news conference at the State Department in Washington, US, on September 27, 2022. Reuters

India, which has a USD 2,000 per capita economy, is concerned over the spike in the price of oil due to the Russia-Ukraine conflict and it is “breaking our back,” External Affairs Minister S Jaishankar said on Tuesday.

Addressing a joint press conference with US Secretary of State Antony Blinken after holding bilateral talks, Jaishankar said there is a very deep concern among developing countries about how their energy needs are addressed.

Speaking about the Ukraine war, he said: “We have taken the position privately, publicly, confidentially and consistently that this conflict is not in anybody’s interest.”

The best way forward is to return to dialogue and diplomacy, he said.

Jaishankar was responding to a question on a cap on Russian oil.

“Right now there are some issues,” he said.

With sanctions imposed by western nations making a scant impact on Russia, the G-7 countries and the European Union have mooted an oil price cap on Russian crude and refined products to limit Kremlin’s revenues.

Earlier this month, a statement issued by G-7 Finance Ministers said the price cap was specifically designed to reduce Russian revenues and its ability to fund the Ukraine war.

The US has asked India to join the coalition to cap the prices of Russian oil, but New Delhi has said it would “carefully examine” the proposal before taking any decision.