Stalin’s son at it again, links Ganguly ill-health to BJP 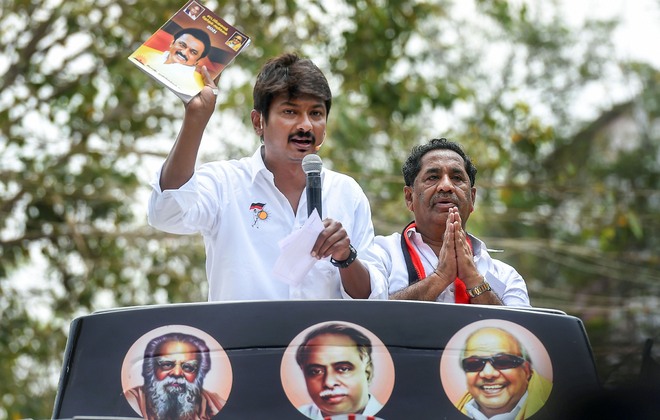 Amid the ongoing I-T raids against his kin, DMK youth wing president and Chepauk constituency candidate Udhayanidhi Stalin is continuing with his relentless attack against the BJP, which is contesting the April 6 Assembly elections with the ruling AIADMK. After allegations that late BJP leaders Arun Jaitley and Sushma Swaraj were “sidelined” by Prime Minister Narendra Modi, Udhayanidhi has now claimed that BCCI chief Sourav Ganguly was “threatened to join the BJP and due to stress, he had a heart attack”.

“Amit Shah's job is to threaten others and topple elected governments, I will not be scared of him, I am Kalaignar's grandson,” Udhayanidhi was quoted as saying. He also raised questions over the appointment of Home Minister's son Jay Shah as the BCCI secretary. The BJP has written to the Election Commission, seeking his disqualification and his name has been taken off the star campaigner list of the DMK in Tamil Nadu. Daughters of the late Union Ministers, Bansuri Swaraj and Sonali Jaitley Bakshi, slammed Udhayanidhi, asking him to refrain from using the names of their parents for his poll propaganda.

Addressing an election rally, Udhayanidhi reportedly said: “People thought LK Advani would be the next PM, but Modi sidelined him. Sushma Swaraj could not handle the pressure and she died. Arun Jaitley too was unable to bear the torture and he died.”