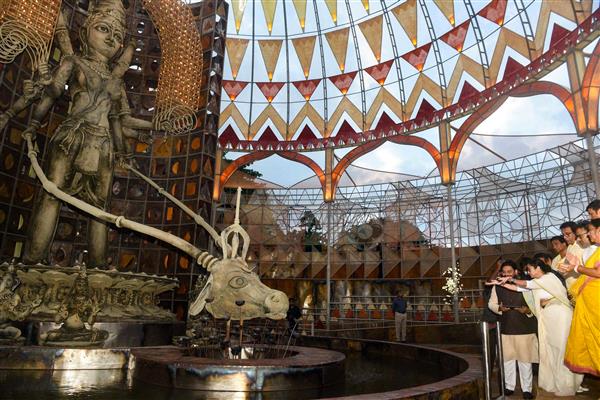 West Bengal CM Mamata Banerjee during the inauguration of a Durga Puja pandal in Kolkata on Thursday. PTI

Meenakshi Lekhi, Minister of State for Culture, on Thursday said the West Bengal Government had “absolutely no role” in the inscribing of Kolkata’s Durga Puja festival in Unesco’s Intangible List of Cultural Heritage of Humanity.

Explaining the process of inclusion of Durga Puja in the prestigious Unesco list, Lekhi said Durga Puja got the recognition because of the work done by three central ministries, namely, education, culture and external affairs.

While the Ministry of Education functions as the nodal ministry for Unesco, Ministry of Culture and Ministry of External Affairs also played important roles in securing the honour bestowed upon the festival by Unesco, Lekhi said.

She said Prime Minister Narendra Modi’s focus on all the government departments working in unison also helped in the coordination of work by the three ministries to press the case of Durga Puja before Unesco.

According to the minister, the state government has nothing to do with the honour. Lekhi also said that when a case for inclusion in the heritage list is presented before Unesco, the country acts as one and no individual should claim credit for success.

The Culture Ministry’s move to showcase its role in securing UN recognition for Durga Puja is believed to have been prompted by the fierce campaign launched by West Bengal Chief Minister and TMC supremo Mamata Banerjee to walk away with the credit for the commendation earned by Durga Puja.

Mamata recently presided over a mega event in Kolkata to thank Unesco for honouring Durga Puja. A procession taken out on the occasion was led by her with folded hands.