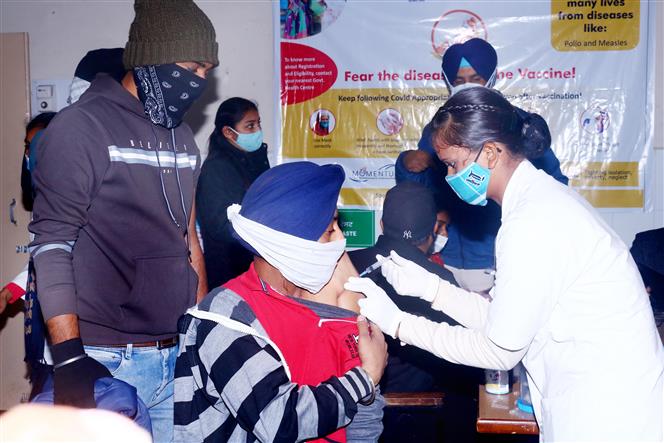 A health worker administers a dose of the Covid-19 vaccine to a man in Patiala on Tuesday. Tribune photo: Rajesh Sachar

In the highest single-day death count, after a gap of seven months, the district today reported seven Covid deaths. So far, the district had reported 34 deaths in the month of January. Officials of the Health Department said that Omicron variant was not ‘mild’, especially for elderly and comorbid patients. Of seven Covid deaths, two patients were aged around 35 years, while others were above 60 years. Health officials said that the residents had wrong perception of Omicron being a mild variant because Covid deaths continued to rise.

Dr Sumeet Singh, District Epidemiologist, said, “People are dying because of Covid only. Omicron may be mild as compared to other variants of corona virus, however, it should not be played down as equal to common cold. People should not hide symptoms and avoid self medications.”

He said that many patients were arriving at a very late stage, consequent upon that some Covid deaths were reported within a few hours of admission.

It has been learnt that the department is putting extra efforts on jabbing to achieve the vaccination target set by the Election Commission.

As a result, testing of Covid cases has already slowed down. The health authorities collected only 2,067 Covid samples in the past 24 hours. Last week, the Health Department was collecting over 3,000 samples daily.