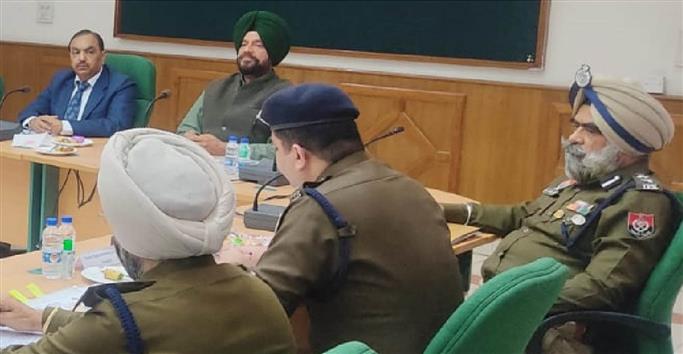 In view of the Punjab Assembly Election-2022, as per the guidelines of the Election Commission of India, the Commissioner of Patiala Division, Chander Gaind, held an inter-state coordination meeting with the Deputy Commissioners and senior police officers of the adjoining districts of Patiala range and Haryana, Kurukshetra, Jind, Fatehabad, Kaithal and Ambala.

IG Patiala Range Mukhwinder Singh Chhina, Deputy Commissioners of Patiala and Sangrur Sandeep Hans and Ramvir along with SSPs Harcharan Singh Bhullar and Swapan Sharma and other officers were also present in the meeting.

Chander Gaind discussed important issues, including strict implementation of the Model Code of Conduct. Gaind, while presiding over the meeting, said that the co-operation of the civil and police officers of the adjoining districts of Haryana and Punjab was essential for holding the forthcoming Assembly elections in a free and peaceful manner. He said that CCTV cameras should be installed at all the inter-state checkpoints and a WhatsApp group of officials of both the states should also be formed.

The Haryana officials assured that they would extend full support to the Punjab authorities during the forthcoming Assembly elections. After the meeting, Chander Gaind divulged the details that the officials of Patiala adjoining districts of the neighboring state, have exchanged necessary information and promised for the better coordination and monitoring of the bad elements that could affect the election process. They also discussed all necessary aspects to hold the elections in a peaceful manner and have also formulated a joint strategy to curb the flow of all kinds of drugs, including alcohol, especially medical drugs, legal, illegal weapons and illicit cash.

IG Mukhwinder Singh Chhina asked the Haryana police officers to give strict instructions to their police stations and chowkies in-charges adjoining Punjab to cooperate with the Punjab Police for holding the Assembly elections in an independent manner. Chhina said that weapons with all India permit should also be deposited and special attention should be paid to such anti-social elements residing in these districts which could disrupt the Punjab elections.

District Election Officer and Deputy Commissioner Patiala Sandeep Hans said that as per the instructions of the Election Commission, in today’s meeting the civil and police officials of the neighboring state discussed all aspects to maintain the law and order and ensure free and fair Assembly elections. SSP Harcharan Singh Bhullar said that special teams, including permanent checkposts would be formed to keep a close watch on all unpaved and paved 64 roads connecting the two states and also patrolling and checkposts would be set up.