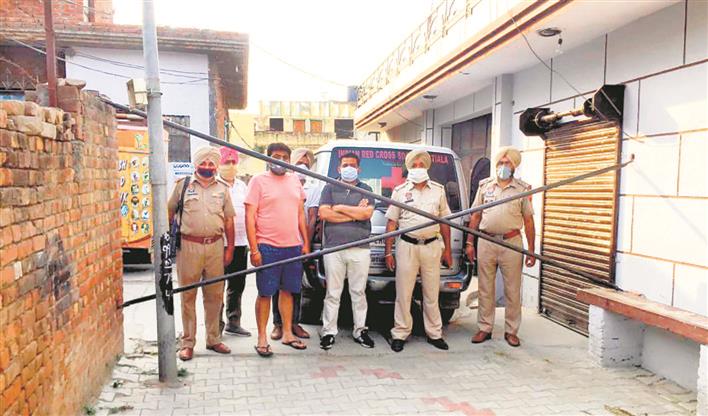 Police personnel stand guard at one of the entry points to Dhablan village. The village was declared a macro-containment zone on Tuesday after 21 people tested positive for Covid-19. Tribune photo: Rajesh Sachar

The Health Department here today declared Dhablan village as a macro-containment zone after 21 people in the area tested positive for Covid-19.

The village has been sealed for the next 14 days to contain the spread of the virus.

The Health Department informed that they would carry out mass sampling in the village to cover the entire population within the next few days.

Notably, the village has already reported five Covid deaths in the past 30 days.

As per the containment policy, the movement of the villagers has to be restricted. Consequently, the police personnel have been deployed at the entry and exit points of the village.

“We will try to cover the entire population of the village, at least once. We have sought cooperation from the villagers, and hopefully, we will be able to contain the spread,” said Dr Parvez.

Health officials informed that they would conduct Covid sampling in the adjacent villages also as there was a regular movement of the residents to the nearby villages.

Meanwhile, Patiala reported 505 new cases, including 59 from Kauli block. With today’s tally, the total count of positive cases in the district has risen to 43,179. The number of active cases stands at 3,917.

Of 505 positive cases reported on Tuesday, only 35 were the contacts of the past positive patients.

Nabha and Harpalpur registered 26 cases each, while 25 cases were reported from Kallon Majra and 24 from Dudhan Sadhan, he said.