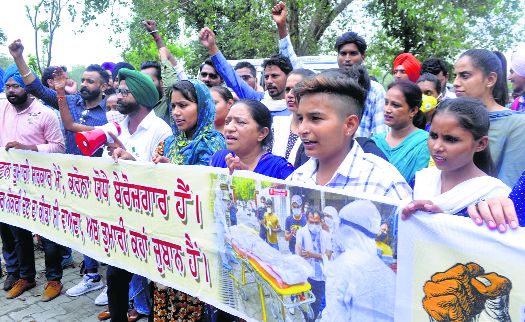 Frontline workers associated with a union took out a protest march from Gurdwara Dukhniwaran Sahib to the Fountain Chowk here today. They are demanding their contracts should be continued.

Members of the union said they were hired by the state government on contract and assured that their contracts would continue as long as the Covid-19 cases were reported.

Rajwinder Singh, state president of the union, said: “We held protests in the city earlier as well.” There are around 1,200 members of the union. “They assured us that our contracts will continue until cases of Covid are reported. But our contracts were not renewed after October last year,” he added.

He said the union leaders had held a number of meetings with the Health Minister and MP Preneet Kaur, but to no avail. “Now they have received our memorandum and assured us a meeting with the Member of Parliament,” he said.