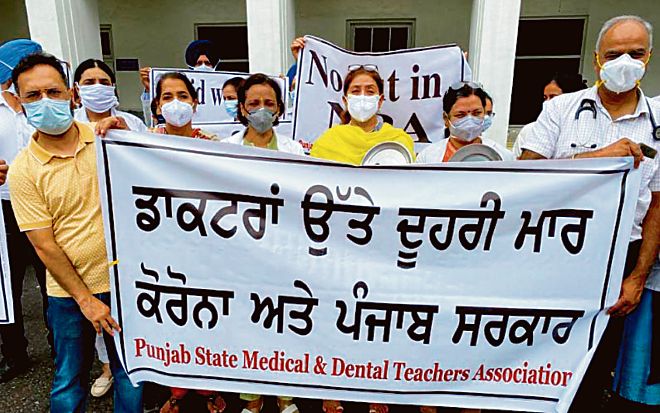 After waiting for more than a month, the faculty of government medical and dental colleges in Patiala has announced an indefinite protest from July 23 against the failure of the stare government to rectify the NPA anomalies in the Sixth Punjab Pay Commission Report.

The Punjab State Medical and Dental Teachers Association (PSMDTA) has decided to shut outdoor patient services, elective surgeries, faculty administrative duties, routine medico-legal services, along with the suspension of classroom teaching of medical students for three hours from 8am to 11am in the medical and dental colleges and hospitals.

Today, teachers and doctors held a general body meeting at Govt Medical College here and declared the indefinite protest by banging plates. The doctors said while they were fighting the Covid pandemic, the state government had made a drastic cut in their salaries.

According to Dr DS Bhullar, state general secretary of PSMDTA, GGS Medical College (Faridkot) Teachers Association and the PCMS Specialist Doctors Association have also decided to join in the indefinite daily protest and the would jointly protest along with all other Punjab Government doctors.

Last week, the PSMDTA and the PCMS Specialist Doctors Association had met Brahm Mohindra, Chairman of the Subcommittee of Punjab Ministers on Pay Commission Anomalies and Finance Minister Manpreet Singh Badal for a speedy redressal of their NPA demand.

The PSMDTA has once again appealed to the Chief Minister Capt Amarinder Singh and ministers in the subcommittee to accept their demands so that the doctors could resume their duties in the interest of the poor and needy patients and students.