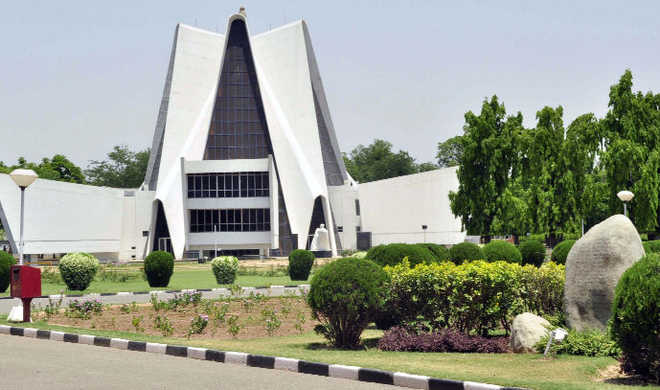 Students of Punjabi University today protested against the university administration while alleging lapse in security after a police team entered the campus. The protesters alleged that cops violated the university rules by entering the campus without informing its authorities.

I have taken up the matter with the SSP, Patiala, as the police are supposed to inform us before entering the university. — Prof Arvind,Vice-chancellor, punjabi university

Rashpinder Jimmy, president, Punjab Radical Students’ Union, said, “In view of the ongoing admissions, students had set up help desks on the campus. Three cops, including a woman, reached a help desk without any prior information. They had come to arrest students, including girls, who had last year filed a case against a university employee over harassment. The students were to be arrested in a cross case. The employee already stands suspended in another case.”

Vice-Chancellor Prof Arvind said the police had come on the campus uninformed. “I have taken up the matter with the SSP, Patiala, as the police are supposed to inform us before entering the university.”

Inspector Amritvir Singh, SHO, Urban Estate police station, said cops went to the campus to arrest students, who were named in an FIR registered last year. “They were named in the case, but were not arrested. They sought time today as well and assured that they will be present themselves at the police station soon,” he said.

On the university and students’ claims that the police need to inform the university administration before entering the campus, he said the university should give it in writing if such was the case. On this, Prof Arvind said, “We will look into the rules and take up the matter with the police.”