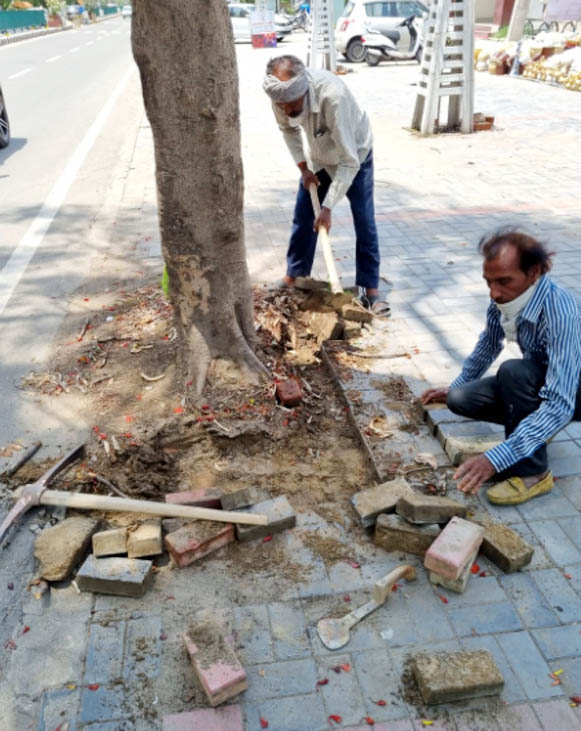 Tiles around trees being removed by employees of the Forest Department on Bhupindra Road in Patiala. Tribune photo: Rajesh Sachar

Observing that interlocking tiles around trees could be a possible reason for the drying of two trees on the Bhupindra road, the Forest Department has started removing these to allow percolation of water into the ground. Officials said a fence would be installed around the trees to ensure that no obstruction was caused to their growth.

Earlier, misconceptions were spread regarding the department’s plans. A few trees had dried on the roadside which is covered with tiles and used as a parking space.

Residents claimed the department, at the behest of some shopkeepers in the vicinity, was going to axe the trees to make more room for the parking of vehicles. An advocate of the Punjab and Haryana High Court had filed a complaint to the office of Chief Secretary, Punjab, demanding that the trees must not be axed.

Responding to the matter, District Forest Officer (DFO) Vidya Sagri said: “There are no plans of the department to axe the trees. All the more, we have started an initiative to remove interlocking tiles around more than 200 trees to ensure that no obstruction is caused to their growth and water percolates easily.”

“No trees will be allowed to dry by negligence or deliberately. We will look into the reasons for the drying of two trees and take appropriate steps,” she said.