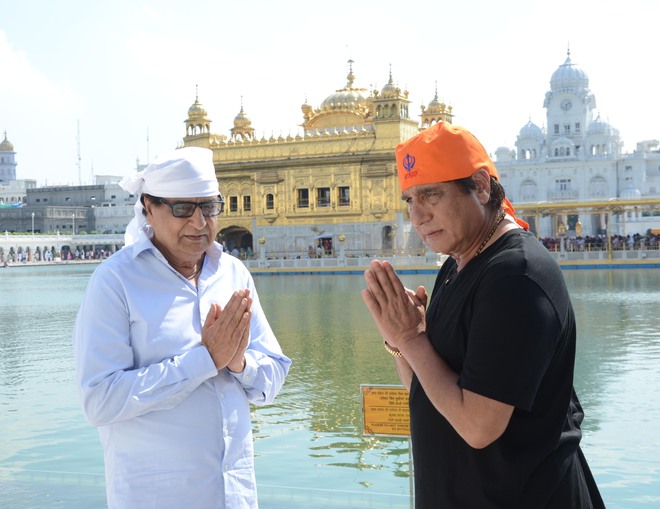 Actor and politician Raj Babbar is set to make a comeback on silver screen after a gap of five years with the upcoming horror flick ‘Bhoot Uncle Tussi Great Ho’. The actor today visited Golden Temple along with noted filmmaker KC Bokadia, who is helming the Punjabi comedy-horror flick scheduled for release this year.

Babbar, who was last seen in ‘Tevar’, said he felt at home every time he visited Amritsar. “It’s been my home for long as I spent my childhood here. I had family here and still do. The holy city has a special place in my heart.”

Babbar said the upcoming movie ‘Bhoot Uncle Tussi Great Ho’ is based on a family, who finds purpose and true worth of being a family through a ghost. “The movie is not just a spoof, but has elements of spirituality and message of gurus incorporated through its characters and storyline. Great effort has been made by the entire team to ensure that we bring good content on screen after this long gap.”

Apart from Babbar, Bollywood veteran and his co-actor in many films, Jaya Prada is set to make her Punjabi film debut. The film also has popular stars of Pollywood Gurpreet Ghuggi, Karamjeet Anmol, Harby Sandhu, Ihana Dhillon, Sardar Sohi and Guggu Gill. The film was scheduled to release earlier this year, but got delayed due to the pandemic.

This would be KC Bokadia’s second Punjabi production after ‘Meri Vahuti Da Vyah’. The filmmaker who has given memorable movies like ‘Teri Meherbaniyan’, ‘Naseeb Apna Apna’, and ‘Phool Bane Angarey’ has been positive about his entry into Punjabi film industry.

“My treatment of directing any content remains the same, I always aspire to give wholesome experience to audience through my films and not stick to one genre. Horror comedies have performed well recently and is picking up as a popular genre in Bollywood and its still a new genre in Punjabi films. I am hopeful that audience will like our effort,” he said.