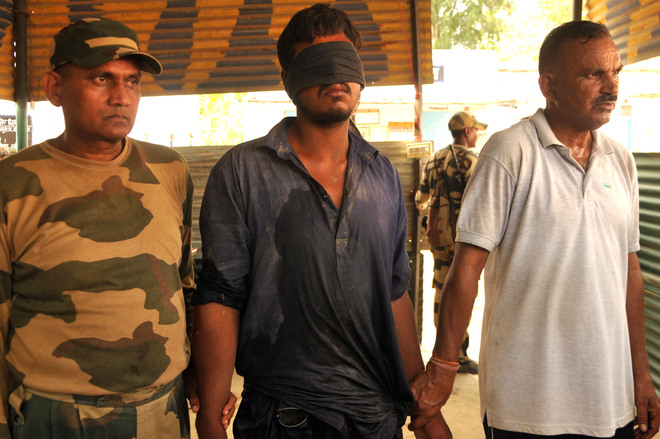 Smuggler Kashi Ali, who was nabbed near the Pakistan border, in custody of the BSF in Amritsar on Sunday. Photo: Vishal Kumar

Three officials have been booked for receiving Rs 1,63,000 bribe from an inmate in Faridkot Central Jail. They have been identified as Deputy Jail Superintendent Gurjit Singh Brar, warder Gurtej Singh and warrant officer Tarsem Pal.

A case was registered after a video of inmates went viral from the jail, accusing the officials of collecting bribe from them in lieu of providing them with drugs and mobile phones.

Taking cognisance, the state government has ordered a probe to be conducted by a DSP-rank officer in Faridkot.

In the video that has gone viral on the social media, some inmates had claimed drugs and mobile phones were being made available in the jail at exorbitant prices. They said while a smart phone could be procured for Rs 25,000, a keypad phone was available for Rs 5,000.

The police have declined to share the details of the investigation, but said the accused had taken Rs 1,63,000 from an inmate, Vishal Kumar.

Last year, an Assistant Jail Superintendent in the prison was booked for allegedly receiving Rs 15,000-bribe from an inmate for use of a mobile phone.

Mobile phone seizures from Faridkot jail inmates have been continuing unabated for the past two years. On an average, 12-15 phones are seized from inmates here every month. The police and jail authorities claim to have started an investigation to look into the details of calls made from the seized phones to probe the links between inmates and outsiders but all such ‘investigations’ have remained inconclusive.

Though a large number of phones have been seized, sources claim many are still available inside the jail. In the past one year, over 150 mobile phones were recovered from the jail, which houses over 2,200 inmates, including 12 gangsters.

Amritsar: The BSF on Sunday nabbed a Pakistan smuggler — Kashi Ali of Maniala village in Lahore — and seized 6.3-kg heroin from him, during an operation conducted near the border here. He was trying to intrude into Indian territory via the International Border. The accused was carrying six packets of heroin in a jute bag bearing the name of Lahore-based Shaukat Khanum Memorial Cancer Hospital and Research Centre, established by Pakistan PM Imran Khan and run by a Trust chaired by him. TNS