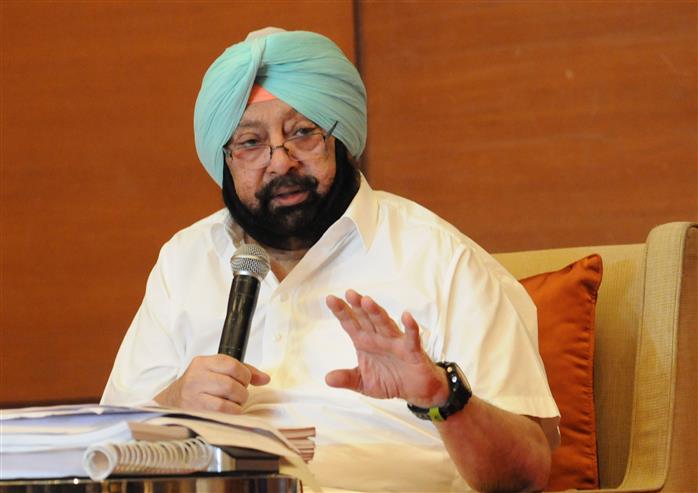 Former Punjab chief minister Amarinder Singh on Friday targeted Congress leader Harish Choudhary, accusing him of turning the current chief minister into a “rubber stamp” while junking accusations that he was in cahoots with the Bharatiya Janata Party and the Prime Minister when he occupied the post.

The former Chief Minister also said he does not owe any explanation to a legislator “sacked” as a minister in Rajasthan.

Choudhary was recently appointed as the incharge of Punjab affairs at the All-India Congress Committee (AICC) and had resigned as a minister in Rajasthan.

Amarinder Singh had quit the Congress after he put in his papers as the state chief minister following a bitter power tussle with Punjab Congress chief Navjot Singh Sidhu.

The former chief minister floated his own political party and hoping for a seat arrangement with the BJP for the upcoming Assembly elections.

Amarinder Singh said although he owed no explanation to “an out of job legislator who has been sacked as a minister in Rajasthan”, he still wanted to set the record straight.

“Had I had any understanding with the prime minister or the BJP when I was the chief minister, I would not have supported the farmers’ agitation and demanded repealing of the agriculture laws and passed a law in the Vidhan Sabha against these,” he said in a statement.

“Even your new CM (Charanjit Singh Channi) has met the PM and the HM (Home Minister Amit Shah) and from your senseless logic then he should also be having an understanding with the BJP and waiting to be sacked,” he taunted Chaudhary.

Amarinder said, it was for the first time that a party in-charge had made the state as his permanent abode.

“I have worked with 14 party in-charges like Pranab Mukherjee, Mohsina Kidwai, Janaradhan Dwivedi to name a few, and they would rarely interfere, leave aside visiting or settling down in Punjab,” he recalled.

“A party in-charge is not supposed to settle down in the state he is assigned but to facilitate interaction and feedback to the high command,” the former CM said.

He alleged that Harish Choudhary is “enjoying” chief ministerial power and privileges in Punjab, turning Chief Minister Charanjit Singh Channi into a “rubber stamp by dictating terms to him”.

“Choudhary has been even attending the cabinet and other meetings of officers, which is illegal and unconstitutional,” he alleged.

The former Chief Minister questioned the legality of Choudhary getting a ministerial bungalow in Chandigarh and the entire Punjab Bhawan at his disposal, from where he “commands and dictates orders” to the CM, other ministers and officers”.

“Who is paying for his expenses,” he asked.

The remarks by the former CM have come two days after Harish Choudhary issued a show-cause notice to Patiala Congress MP Preneet Kaur, wife of Amarinder Singh, seeking an explanation for her “anti-party activities”.

Amarinder Singh had also announced that he will fight from the Patiala seat, his family bastion, in the 2022 Assembly elections. — PTI