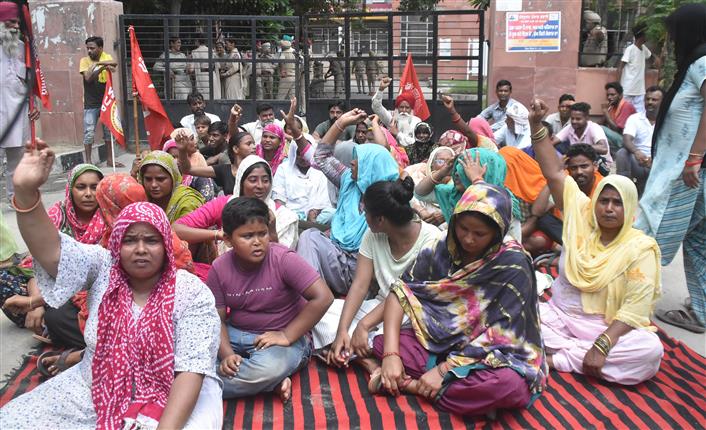 The residents, whose houses were razed by the Bathinda Development Authority (BDA) during a demolition drive at Dhobiana Basti on Friday, carried out a protest march in the city today.

Members of the Bharti Kisan Union (Ekta Ugrahan), and the Khet Mazdoor Union, also extended their support to the protesters.

After agitating in various parts of the city, the protesters sat on an indefinite dharna at the District Administrative Complex.

Yesterday, the BDA accompanied by a heavy police force had razed more than 10 structures in the wee hours at Dhobiana Basti.

The BDA officials claimed the majority of occupants had agreed to move to a space allotted to them, but a few of them reportedly remained “adamant”. As a result, the demolition drive was done to remove the alleged encroachments alongside the Ring Road.

Amit Singh, a member of the Makaan Uzada Committee, said, “Is this the change the AAP party talked about? Houses of poor people are being demolished. They had been living here for more than 30 to 40 years. We will not sit quietly.”

Meanwhile, a meeting between members of the Makaan Uzada Committee and the Additional Deputy Commissioner remained inconclusive as the former declined the offer of getting houses allotted at different locations. — TNS

Is this the change AAP talked about? Houses of the poor are being demolished. We won’t take this hands down. — Amit Singh, member, makaan uzada committee