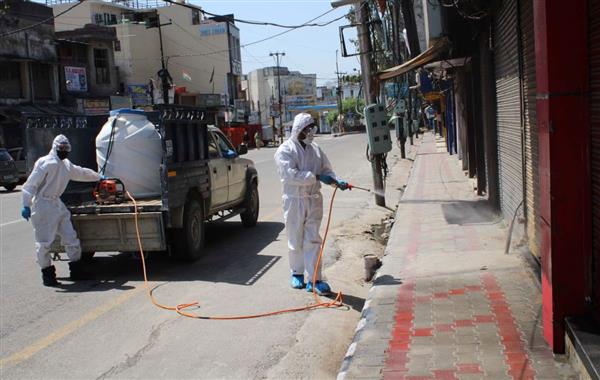 The state has recorded six coronavirus deaths so far.

With the latest cases, the total number of coronavirus patients in the district has risen to three.

The 55-year-old resident from the village was diagnosed with coronavirus on Friday, after he was admitted to GMCH in Sector 16 in Chandigarh on March 31. The man suffers from diabetes and hypertension.

Following this, health authorities sealed villages around Chatamali and collected diagnostic samples of 17 persons, including primary contacts of the patient.

On Sunday, the district administration received reports of 15 persons, out of which the wife and son of Chatamali patient tested positive.

Ropar deputy commissioner said that the authorities have alerted a private hospital and Community Health Centre at Kurali as well as Civil Hospital in Phase VI of Mohali as the patient had visited these before he was admitted to GMCH. He had also attended a medical check-up camp organised in the village on March 13, where 20 people from abroad, along with doctors from CMC hospital, Ludhiana and Mohali were present.

The 20 people from abroad were contacted and they claimed that they did not suffer from symptoms of any kind, added the deputy commissioner.

A man, who had attended the Tablighi Jamaat congregation in New Delhi last month, tested positive for coronavirus in Kapurthala district on Sunday.

He was residing at a mosque at Kot Karar Khan village. The village and the mosque have been sealed.

Two women, who had attended the Tablighi Jamaat congregation in New Delhi, tested positive for coronavirus in Fatehgarh Sahib district on Sunday.

Dr N.K.aggarwal, Civil Surgeon, said that the throat sample of 30 Tablighi Jamaatis, who are isolated at a hospital in the district, was taken. The reports of the two women came back positive, whereas others tested negative for coronavirus.

A 65-year-old man, suspected to have had coronavirus, died at Fortis Amritsar on Monday morning.

"He had been admitted to GNDH Amritsar on March 28-29, where he was diagnosed for pneumonia. As he was not improving, he was tested for COVID-19 and reported negative," Special Chief Secy KBS Sidhu said in a post on Facebook.

He moved to Fortis on Saturday, wherein a preliminary test reported him as COVID positive.

"Another swab has been now obtained and is being tested-- not merely for statistical purposes but also for potentially isolating his contacts, including those in the Government Hospital, Amritsar," said Sindhu.

A 30-year-old man--whose father had attended the Tablighi Jamaat congregation in New Delhi--   tested positive for coronavirus in Mohali on Monday, taking the total cases in the district to 16.

The man is a resident of Sector 68.

"He is the son of a 60-year-old man who had tested positive earlier. Two Tablighi Jamaatis are positive, out of 15 traced and now one primary contact has also tested positive," said DC Girish Dayalan.

A man who attended the Tablighi Jamaat congregation tested positive for COVID-19 in Ludhiana on Monday. With the latest case, the total cases in Ludhiana have increased to six. Out of this, two are related to the Tablighi meet.

81-year-old, suffering from diabetes and hypertension, recovers in Mohali

An 81-year-old woman recovered from COVID-19 and was released from Max hospital in Mohali on Monday.

The woman suffered from diabetes and hypertension. She also had five stents, mostly used to keep coronary arteries open, placed in her.