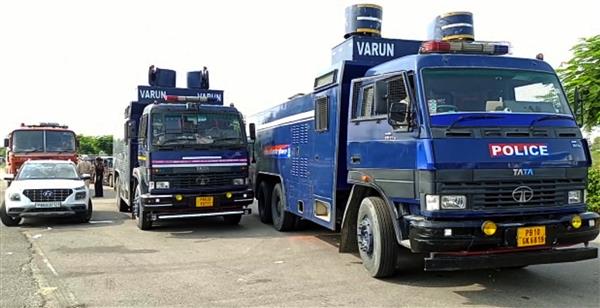 Security deployed near the Beas dera on Monday. Vishal Kumar

The police today registered a case in connection with the clash between followers of Dera Radha Soami Satsang and Nihangs after the latter tried to forcibly enter the dera premises to graze their cattle yesterday.

Senior Superintendent of Police (SSP) Swapan Sharma has confirmed this and said the police were also made party to it. The police, however, have refused to divulge details about the case.

Meanwhile, tension prevailed in Beas for the second consecutive day today. Heavy police force was deployed in the area.

The DGP urged the people not to believe in rumours, as the situation had been brought under control. “The clash broke out over a minor matter. The dispute has been resolved. Legal action will be taken,” he said.

The ADGP said maintaining law and order was the primary concern of the police.

“The SSP is investigating the case under the supervision of IG (Border Range) Mohnish Chawla,” he said.

In all, 12 persons, including three police officials, were injured in the clash. There was pelting of stones and bricks from both sides and shots were fired in the air. The police had to use force to bring the situation under control.

Guru Granth Sahib Satkar Committee’s Baba Balbir Singh Muchhal reached Beas today and extended his support to Nihangs. “If they (Nihangs) do not get justice, action will be taken,” he said.

Maintaining law and order is the primary concern of the police. The SSP is investigating the case under the supervision of IG (Border Range) Mohnish Chawla. — Arpit Shukla, ADGP (Law and Order)