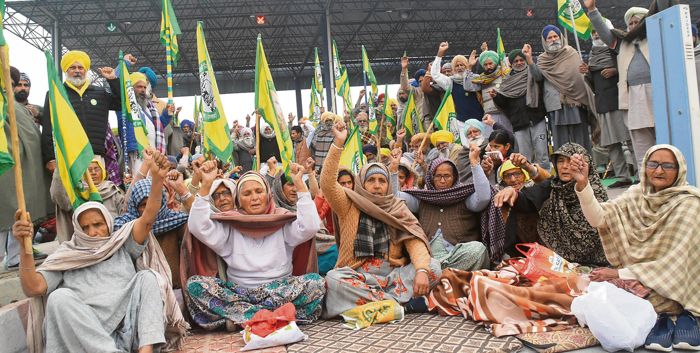 To protest the alleged anti-farmer and anti-people policies of the BJP government at the Centre and the AAP government in Punjab, hundreds of farmers today laid siege to the toll plaza at Ladhowal on the banks of the Sutlej and Bathinda.

The protesters, under the banner of the Bharti Kisan Union (Ekta Ugrahan), made the road toll-free for commuters for three hours from 12 noon to 3 PM.

Sudagar Singh Ghudani, district secretary of the BKU (Ekta Ugrahan), said, “By squatting at the biggest, and perhaps the costliest toll barrier, the farmers and the BKU intended to make it clear to both governments — at the Centre and in the state — that they will no longer tolerate their arrogance.”

Speakers at the protest rally said the people had extended an overwhelming response to the move by farmers’ body which had now resolved to rid the people of this huge extortion by way of toll taxes, in addition to all local and other taxed being paid by road users.

“BKU would achieve this goal through a widespread mass movement, initially in the state and later across the country,” said Ghudani.

The protesters also lashed out at the government for its attitude over liquor factory in Zira which is allegedly causing immense damage to the health of people and environment of the region.

Activists staged a dharna at all toll plazas of Balluana, Jeeda, Lehra Bega and Sheikhpura from 12 noon to 3 pm and made it free for the commuters during that period.

Shingara Singh Mann, district president said, “Local and foreign big capitalist companies are intensifying the exploitation of people in every area. In order to rob the roads, companies have been collecting tolls by setting up toll plazas on major roads for many years. To further accelerate this robbery, toll plazas are being established on small and big roads along with the increase in toll fees.”

Other speakers said the road tax is deducted from every person while buying a vehicle and apart from this, many other types of taxes are being collected. Even after taking the toll tax from the companies, no facilities are being provided to the people and due to unsafe roads, with big potholes, people are losing lives and property due to accidents every day, they said.

Farmer leaders demanded from the central government that all the toll plazas in the country should be closed. Earlier, Kisan Mazdoor Sangharsh Committee had made toll plazas of 9 districts ‘free’ from December 15.

The farmers’ leaders today also strongly condemned the insistence of the police to lay the gas pipeline without the consent of the farmers of Talwandi Sabo village Kauriana. Farmers said that the voice of farmers should be heard. At every place, the police force should stop the seizure of capitalist companies.