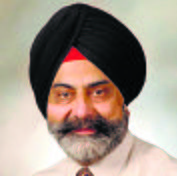 Dr Inder Anand’s father Dr Santokh Singh Anand was one of the founders of the PGI, Chandigarh

Indian-American cardiologist Inder Anand has bagged the prestigious Heart Failure Society of America’s (HFSA) Lifetime Achievement Award for pioneering work in the field, including in areas of congestive heart failure and high altitude medicine and biology.

Anand graduated from an Indian Rhodes Scholar to America’s top rated cardiologist and has a deep connection with PGI, Chandigarh, where he taught for long years before returning to the US in 1990s. Anand’s illustrious father Dr Santokh Singh Anand was one of the founders of the PGI, Chandigarh.

Carrying forward his father’s legacy, Inder Anand bagged the Rhodes Scholarship in 1966 and got a D Phil in cardiovascular physiology from Oxford. There was no looking back since then.

Anand returned to India and served at the PGI starting 1976. In 1991, he relocated to Minneapolis as Professor of Medicine and Director, Heart Failure Programme, at the VA Medical Centre. He remained there until retirement in 2015.