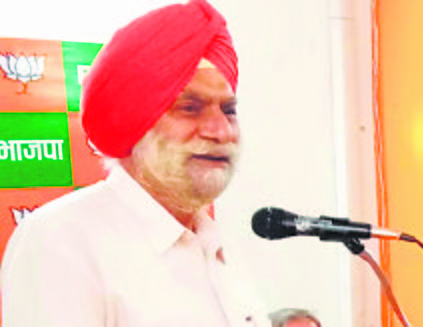 A video of a recent BJP meeting in which party’s newly inducted leader and spokesperson Harinder Singh Kahlon is seen advocating “harsh” measures while dealing with protesting farm leaders has put the party in a spot.

In the video, the former AISSF leader and advocate based out of Jalandhar is seen saying had he been in place of Prime Minister Narendra Modi, he would have cane-charged the protesting farm leaders and put them in jail.

“This according to me is the only solution and we will have to do it,” he is heard saying in the video. The viral video, which was reportedly filmed at the district BJP office in Jalandhar on Sunday amidst massive protest by farmers, invited has criticism on the social media.

Kahlon’s speech, in presence of senior leaders such as former minister Manoranjan Kalia, drew applause from party men. “The video has been edited and is being taken out of context. Kahlon had spoken against Left leaders, not farmers,” claimed Kalia. A number of other party leaders internally condemned the speech, saying such statements should be avoided.— TNS