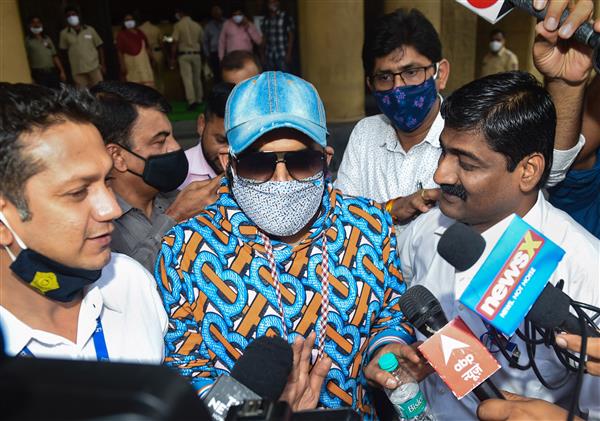 Comedian Kapil Sharma speaks to media personnel after he called for an inquiry against car designer Dilip Chhabria over fake registered cars, at Crime Intelligence Unit (CIU) in Mumbai on January 7, 2021. — PTI

Comedian Kapil Sharma appeared before the Crime Branch of Mumbai Police on Thursday to record his statement in connection with alleged cheating and forgery case against car designer Dilip Chhabria, an official said.

"During the investigation, it came to light that comedian Kapil Sharma had also been allegedly duped. He showed willingness to share information in connection with the case.

Accordingly, he appeared before the CIU on Thursday to record his statement," the official said.

The alleged scam came to light when the police seized a DC Avanti, a sports-car manufactured by Dilip Chhabria Design Pvt Ltd, in south Mumbai on a tip-off that its registration number was bogus.

The car's owner produced documents which were found to be genuine and showed that it was registered at Chennai.

However, another car with same engine and chassis number was found to be registered in Haryana, police had said.

The probe revealed that loans averaging Rs 42 lakh per car were availed by Dilip Chhabria Design Pvt Ltd for DC Avantis manufactured by it in the name of bogus customers, it said.

As many as 120 DC Avanti cars have been sold in India and abroad, and at least 90 of them were allegedly used for obtaining loans fraudulently.

The cars were on paper hypothecated to the finance firm but were already sold off to customers, the investigators claimed.