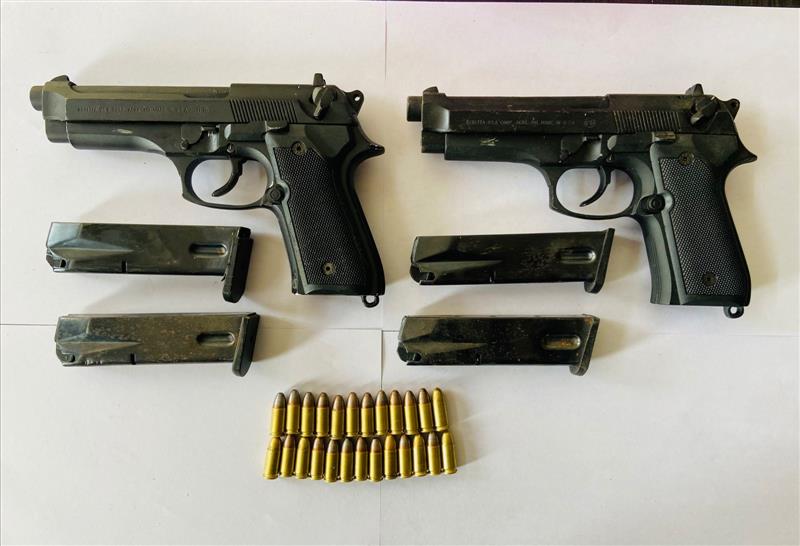 The Punjab Police claimed to have foiled a terror attack in the border state by arresting a “highly radicalised” man, identified as Ranjit Singh, a resident of Sohal village in Tarn Taran, who was allegedly linked with foreign-based terror groups.

Ranjit was part of a group which had vandalised statues of folk dancers installed at the Heritage Street leading to the Golden Temple on January 15, 2020. Ranjit was arrested by the police in a statue vandalising case and was presently on bail, the police said.

pistols along with live cartridges besides a black Royal Enfield motorcycle from his possession.

The DGP said acting on intelligence inputs about the presence of Ranjit Singh, special teams from the SSOC, Amritsar, were sent to the specified area to spot the suspect. A case was registered under Section 25 of the Arms Act, Sections 3, 4 and 5 of the Explosive Substances Amendment Act and Sections 120 and 120B of the Indian Penal Code at the SSOC Police Station yesterday.

Sahota said during investigation, Ranjit revealed he had formed a group named ‘Kaum De Rakhe’ to collect funds on the pretext of social work and through this group, he got in touch with various radical elements based in UK and other countries and extended his help to form sleeper cells under the garb of social work. Ranjit further disclosed that he recently received a consignment of arms and explosives, and was planning to carry out a terror strike to create an atmosphere of fear and lawlessness in the border state, the DGP claimed.

ADGP (Internal Security) RN Dhoke said efforts were being made to ascertain the identity of the UK operatives, who had arranged the consignment, and his other Indian associates. The development has come at a time when Punjab has been witnessing a huge inflow of hand grenades and tiffin bombs along with other weapons.