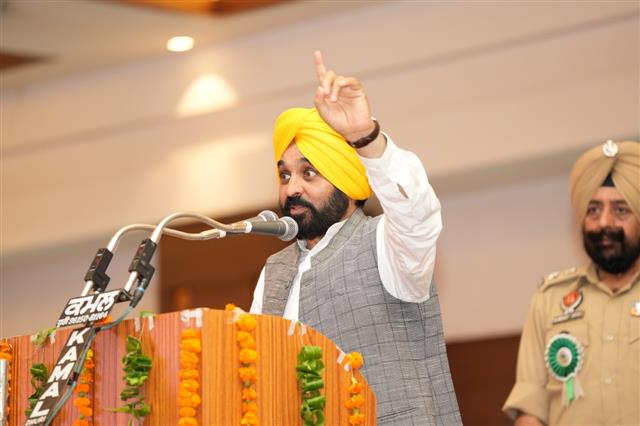 Slamming the Congress and Akalis for their anti-people stance, the Punjab Chief Minister Bhagwant Mann on Friday said that that the leaders of both these political parties are living in ‘fool’s paradise’ assuming that they are still in power.

Addressing the gathering, while presiding over a state level function to mark 72nd state level Van Mahostav here today, the Chief Minister said leadership of both these parties is yet to overcome the trauma of crushing defeat inflicted upon them by the people during assembly elections. He said that they still behave in the way as they are running the government in state. However, Bhagwant Mann said that these power hungry politicians have forgotten that the wise and brave people of Punjab have chosen a government that is serving them zealously.

Taking SAD President Sukhbir Singh Badal to cudgels, the Chief Minister said that the leader who used to boast that they will rule Punjab for 25 years has been totally rejected by people. Bhagwant Mann said that neither he has been able to win his seat nor he gets any candidate now to contest from his party. He said that during their days of power these leaders had forgotten that people are supreme in a democratic set up and once you ignore them in power they won’t give second chance to them.

The Chief Minister, while quipping on former Chief Minister Charanjit Singh Channi, questioned his absence from the political arena. He said that this Congress leader who claimed himself to be capable of doing everything is seen nowhere after the debacle of his party. Bhagwant Mann said that he fails to understand where Channi has ran away adding if this is the condition of the former chief minister of Congress, then that of the remaining party can be judged very well.

The Chief Minister said that as a fact of matter both Congress and Shiromani Akal Dal (SAD) are now ‘deadwoods’ of Punjab politics. He said that the people have rejected them as they have failed to fulfill the expectations of people. Bhagwant Mann said that these parties are now indulging in cheap tactics for scoring brownie points before media.

The Chief Minister said that for the first time a government has been formed in the state which is working untiringly for well-being of masses. He said that people will no longer have to run pillar to post in government offices at Chandigarh and district headquarters for getting their administrative works done as the state government will ensure it at their doorsteps. He said that a mechanism is being evolved where benefits of all the government schemes will be delivered to people at their doorsteps thereby saving the time, money and energy of people.

The Chief Minister said that during the poll campaign they had promised the people of state that the AAP government will transform their destiny. He said that though earlier too the political parties had made promises with them but none of them kept any of their word with masses. Bhagwant Mann said that from first day of assuming charge of office AAP government has already started the process of fulfilling each and every promise made with people to restore the pristine glory of the state.

The Chief Minister said that for the maiden time in history of state a team of honest leaders is serving the people. He said that 75 Aam Aadmi clinics will be dedicated to people on coming Independence Day where people will get quality health and diagnostic services free of cost. Bhagwant Mann said that 16 medical colleges will be constructed in coming five years thereby enhancing total tally of medical colleges to 25 thus transforming Punjab into a hub of medical education.

The Chief Minister said the students aspiring to pursue medical education will no longer have to go to countries like Ukraine. He said that these students will be provided quality medical education in these medical colleges. Bhagwant Mann said that earlier governments have not paid any attention towards it due to which our students had to move abroad.

The Chief Minister further said that in a path breaking initiative his government provided 600 units of free power per billing cycle to every section of society. He said that as a result of this, 51 lakh households out of total 74 lakh will get zero electricity bill in the month of September. Likewise, Bhagwant Mann said that 68 lakh household will get zero power bill in January, which will be roughly 90% of the total households of the state.

Announcing new projects for Dhuri assembly segment, the Chief Minister announced that state government will construct Railway over Bridge (ROB) on Railway line bisecting city in two parts at a cost of Rs 15 crore. Likewise, he announced a grant of Rs 2 crore for building state-of-art park for residents, upgrading existing Badminton complex to enable 70 players to play in it and complete overhaul of sewerage system of city with the cost of Rs 13 crore. Bhagwant Mann also announced to restore all the previous permits to ensure better road connectivity with every educational institutes.

In his address Environment Minister Gurmeet Singh Meet Hayer said that single use plastic was posing a grave danger to the human life. He said that every effort will be made to save the state from this danger.

On the occasion, the Chief Minister also unveiled jute bags prepared by the Punjab Pollution Control Board to replace the plastic bags.