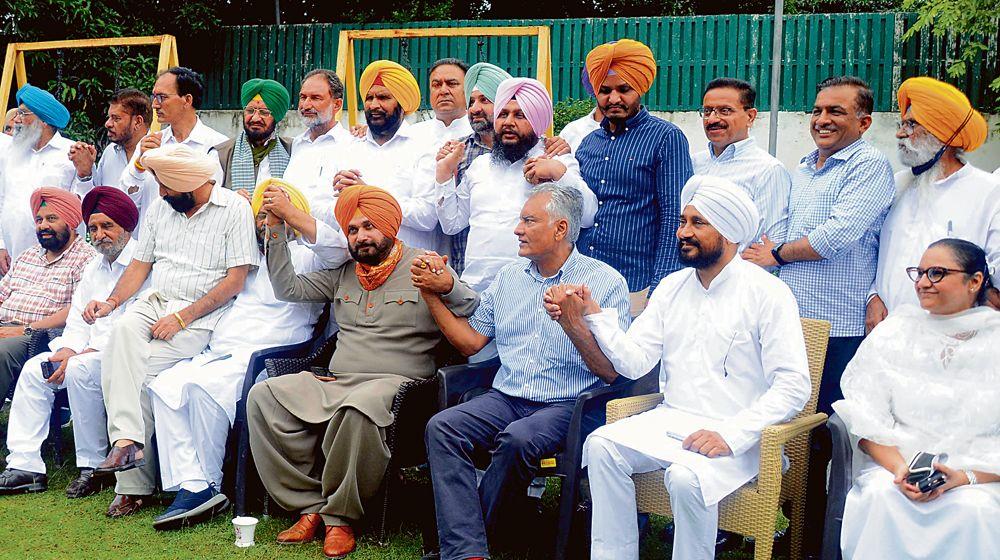 Navjot Singh Sidhu with party leaders and his supporters. file

With 58 of the 80 Congress MLAs backing Navjot Singh Sidhu’s appointment as the new PCC chief, it is clear that Punjab MPs, including Partap Singh Bajwa, Manish Tewari, Ravneet Bittu and Gurjeet Aujla, who stood by CM Capt Amarinder Singh on the issue, completely failed to read the popular sentiment.

Sensing anti-incubency, the MLAs have welcomed the change in the PCC presidentship in the hope that a crowd-puller like Sidhu

“The message is loud and clear. The people are disappointed with the government for its failure to fulfil its promises. Now that Captain has accepted this reality, it is to be seen what all will change on the ground,” former PCC chief Sunil Jakhar observed. Rana Gurjeet Singh, a prominent face in the CM’s camp, noted that a directive issued by the high command had to be followed by all, including the CM and the Pradesh Congress chief.

Pramod Kumar, the Director of the Institute for Development and Communication, maintained that Captain had no other choice but to abide by the high command’s decision, “waiting for the situation to change in his favour.” He did not think that a change in the PCC presidentship would help the Congress. “The people are unlikely to forget the fruitless four-and-a-half years of the Congress rule. Most of the ‘tainted’ leaders are now with Sidhu,” he claimed.

A senior Congress leader said it was evident that the party had decided to go by the report prepared by poll strategist Prashant Kishor, who reportedly told the high command that the Congress in Punjab could not win another term under the “current leadership”. He said it was unfortunate that Captain’s advisers had not told him about the on-ground situation.