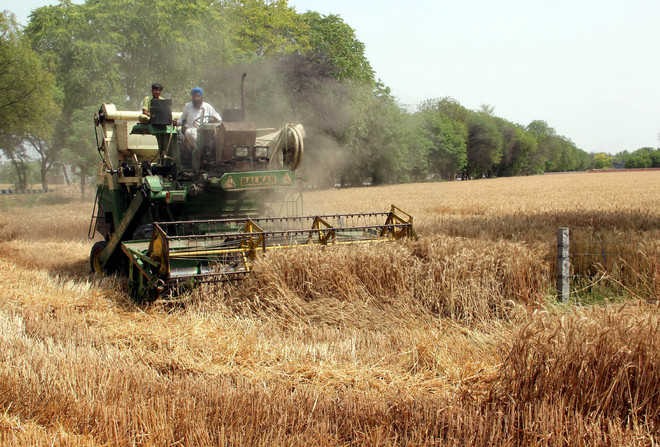 Even as the Reserve Bank of India (RBI) conceded the Punjab Government’s request for release of Rs 22,936 crore against CCL for April 2020, Chief Minister Capt Amarinder Singh on Friday asked the state Agriculture and Food Departments to work out ways to procure wheat grain from within the villages that are located more than 1-2 km away from mandis.

The Chief Minister reviewed the Rabi harvesting and procurement arrangements through a video conference, and directed officials to minimise the exposure of the farmers to Covid-19, press statement issued by the government said.

He also gave direction to get rules amended to provide payment to farmers through arhtiyas, saying that any changes in the system, including direct bank transfers, should be put in abeyance under the current circumstances. The system of direct transfer was to be commenced from this season.

To check hoarding, a committee of senior officers was set up to monitor essential supplies. He directed Punjab DGP Dinkar Gupta to take strict action against those hoarding material.

Chief Secretary Karan Avtar Singh said that supply of essentials was being maintained, with 35-40 per cent of the usual truck strength still operational. More trucks would be permitted to bring in supplies in the coming days.

While an Uber-like system of pooling farmers to distant Mandis on the lines of the suggestion made by the Prime Minister could be considered, the Chief Minister said he was open to a proposal for ‘doorstep’ kind of procurement of grain if comprehensive modalities could be worked out.

While around half the villages were located close to mandis, and curfew passes could be issued to farmers to visit mandis in small numbers at a time, for the villages far away, the Chief Secretary suggested sending officials to handle the procurement. Arhtiyas, who currently undertake bagging of the grain, could be entrusted with the task of handling it in the village itself.

A final decision would be taken in a couple of days.

Agriculture Secretary Vishwajit Khanna said incentives for staggered marketing, which the state government had already suggested to the Centre, could go a long way in checking crowding at mandis. A total of 1.8 lakh metric tonne of wheat was expected to be procured this year. Harvester combines would be allowed to operate in the fields April 15 onwards.

Khanna said in case the West Bengal government, which had ordered closure of jute mills till April 6, did not open the same, the shortage of bales in Punjab would be met through PP bags, which were currently under production.

Arrangements were also in place for sanitisation and distribution of masks to procurement agency staff and farmers (through arhtiyas), Khanna said, adding that segregation and marking was being done at the mandis to maintain social distance.

As many as 1,498 clusters of the migrant labour had been formed in all districts, besides to 162 shelters/relief centres.