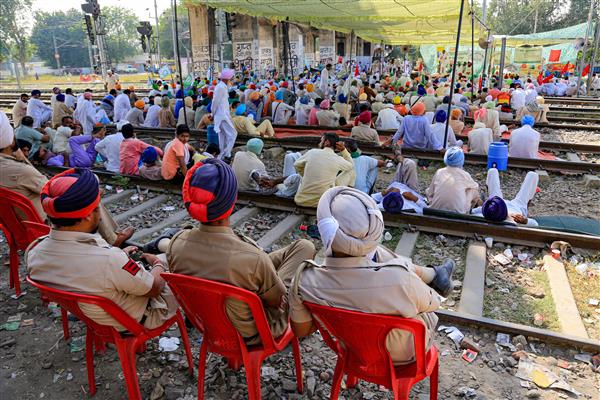 Police personnel keep vigil on farmers during their 'Rail Roko' protest against the new farm bills, in Bathinda. PTI

The farmer bodies in Punjab on Wednesday announced the easing of their three week-long ‘rail roko’ agitation by allowing goods trains in the state.

“We have decided to allow only goods trains from today till November 5,” he said here.

The announcement comes after a meeting of different farmer organisations here.

Chief Minister Amarinder Singh welcomed the announcement, saying it was in the interest of the state’s economy and its revival.

He said the farmers had shown their love and concern for the people of Punjab with this move as it will allow the state to get its much-needed coal supplies.

In a statement, the CM stated that the people of Punjab had been facing a total power shutdown as a result of coal shortage due to the blockade, and the decision of the protesting farmer unions had come as a major relief to them.

The protesting farmers, however, said they would continue to stage sit-ins outside fuel pumps of some corporates, toll plazas and residences of BJP leaders in the state.

“The next course of action will be announced in a meeting fixed for November 4,” Bharatiya Kisan Union (Dakunda) general secretary Jagmohan Singh said.

The Punjab government had been urging the protesting farmers to relax their rail roko agitation in the wake of severe shortage of coal for thermal plants in the state.

Several industrial organisations had also complained of not receiving their inputs due to the agitation.

Farmers in the state had blocked rail tracks from October 1 on a call given by several farmer unions. Some tracks had been blocked since September 24.

On the four Bills passed by the Punjab Assembly on Tuesday against the Centre’s farm laws, Bharatiya Kisan Union (Rajewal) president Balbir Singh Rajewal said it was a “big achievement” of farmers’ agitation.

“It has happened for the first time that a special session of the Assembly was called and the Bills were passed under pressure from farmers.

“It is a big achievement of farmers’ agitation,” he said.

The Bills were passed after an over five-hour discussion, in which BJP MLAs did not take part. The BJP has two legislators in the assembly.

The chief minister said the easing of the agitation would also help the industry to get back on the path to revival.

“The ‘rail roko’ stir of the farmers had caused huge financial losses to the industry, thus compounding the crisis triggered by the COVID-19 pandemic,” he said in the statement.

He said the unrestricted movement of goods trains will help the state replenish its critically low urea supplies, thus catering to the urgent need of the farming community for fertilisers.

The senior Congress leader, however, urged the protesting farmer unions to also lift the blockade on passenger trains, which are catering to tens of thousands of Punjabis every day, especially during the present festival times.

“The people of Punjab want to come back home to celebrate the festival season with their families,” he said, appealing to the protesters. — PTI