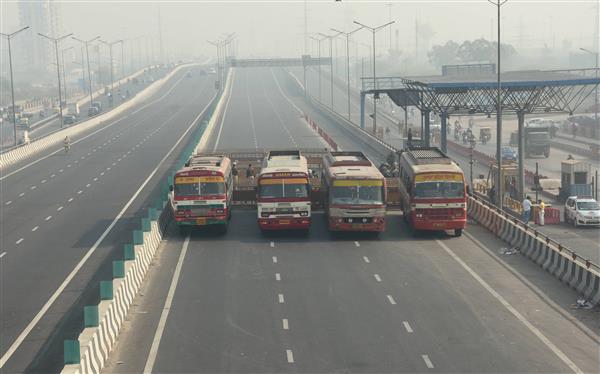 Buses parked near police barricades to block a road during farmers Delhi Chalo protest march against the Centres new farm laws, at Ghazipur border in New Delhi on December 3. PTI

Hours before the scheduled talks between the agitating farmer leaders and the Centre on Thursday, the Delhi Traffic Police shut down the NH-9 and NH-24 from Ghaziabad to Delhi to stop any more farmers joining the agitation and entering the national capital.

Chilla Border one carriageway from Delhi to Noida was opened for traffic yesterday, however, the other carriageway from Noida to Delhi will continue to remain closed, the Delhi Traffic Police tweeted.

Small borders like Auchandi and Lampur connecting Delhi and Haryana have also been sealed.

Tikri border, Jharoda border, Jhatikra border are also closed for any traffic movement while Badusarai border is open only for two wheeler traffic.

The G.T. Road was also closed from both sides in Swaroop Nagar by Delhi Police as a precautionary measure.

The Delhi Police also closed the NH-1 road from both sides to avoid the protesters build up in the capital which has also resulted in traffic snarls for those caught unaware.

Traffic was, however, open on Kalindi Kunj road and DND connecting Delhi and Noida for commuters. Congestion in traffic was reported from these two stretches though.

As the protest entered its eighth day and with inputs that more farmers from Punjab, Haryana and western Uttar Pradesh can move to the capital, the security has been beefed up at Singhu border, Tikri border, Gazipur and Chilla borders where the farmers have been protesting against the farm laws.

Paramilitary forces along with the Delhi Police is keeping a constant check on the agitation. Heavy barricades have already been placed at the protest sites.

Talks between the Centre and farmers demanding a rollback of the three recent farm sector legislations, ended inconclusively over the past few days with a new round about to take off at the Vigyan Bhawan.