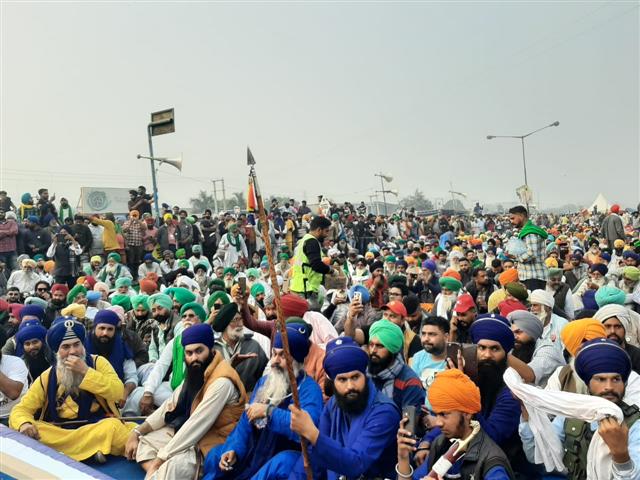 The fields are alive with the sound of music, not wedding ditties or soulful melodies but songs of resistance born in the farmers' protest against the new agri laws and echoing all the way from Punjab to Delhi.

As thousands of farmers, mostly from Punjab and Haryana, braved water cannons and teargas to camp at the national capital's borders to demand a rollback of the laws and their representatives held talks with the government, the songs flowed, speaking of pride of the land, strength in unity and the rights of the people fighting a mighty establishment.

Shared on YouTube, WhatsApp and other social media platforms, the protest music has found a wide audience. Several singers said it is also an assertion of their Punjabi identity that they say is deep-rooted and comes before caste or creed.

"This is a big issue for us. We are all connected with the soil," said singer Kanwar Grewal, the voice behind the popular protest songs “Ailaan” and “Pecha” that support the farmers' agitation.

He is planning a third song "Jawani Zindabad" to highlight the participation of youth in the protest.

"Pecha", which has been written by Harf Cheema and sung by both Cheema and Grewal, has got more than 30 lakh views on YouTube. While the song speaks of the rift between Punjab and Delhi, farmers' suicides, the Centre's "kaliya niti karde laagu (bad policies) and rouses people to wake up, the accompanying video has long shots of convoys of trucks and tractors blocking highways and men and women, young and old, shouting slogans and holding flags.

"The song is about common people fighting against the government for their rights. It is a democratic country. Everyone has the right to express their views. Farmers are protesting and we are using music as a tool,” Cheema told PTI.

He said the protest has become a mass movement with not just farmers but traders and small shopkeepers from 18 states also joining the protests.

Cheema estimates that 70-80 protest songs have been composed and circulated in the last two to three months since the farmers have been protesting – before gathering at Delhi's gateways, farmers from Punjab had been staging numerous protests, including ‘rail roko' agitations.

"All this is for farmers who feed us day and night. This is all we can do for them,” said Cheema, who has also penned and voiced the songs “Sarkare” and “Punjab” spotlighting the current stir.

Take away agriculture from Punjab and there is not much left, said Grewal, adding that 75 per cent of the population is connected to farming in one way or another.

"A brother of mine wrote the song and we started singing. It became a rage. We never thought we would come up with songs,” said the singer.

Noted Punjabi singer and actor Harbhajan Mann, who has been supporting farmers' protests for the last several months, also came out with a new song on Wednesday.

" 'Murrde ni laye bina haq, Dilliye'... is all about how farmers, carrying rations for six months, are protesting and stresses that the safety of their fields is very important. It is a fight of their existence,” Mann said.

The video of the song shows farmers braving water cannons and breaking police barriers as they try and push their way into Delhi.

The Punjabi singer and actor, who had attended the protest in Delhi, on Friday announced he will not accept the Punjab government's 'Shiromani Punjabi Singer' award as a sign of solidarity with the protesting farmers “Though I'm grateful to be selected, I humbly cannot accept the Shiromni Gayak award from the Department of Language. People's love is the biggest award of my career, & all attention & efforts right now from us all must be dedicated to the peaceful farmers' protest,” Mann said on Twitter.

He has also come out with "Anndataa, Khet Saadi Maa, Khet Saadi Pagg" (fields are our mother, fields are our pride).   "When farmers are facing tough times, it is our responsibility to stand with them. Farmers feel that these laws are not in their favour. We should support them in their agitation,” said Mann.   Famous singer Jasbir Jassi, best known for his hit "Dil Le Gayee", said it is good that Punjabi artists are supporting the farmers.

"Punjab ka jo jeevan hai emotional raha hai (Punjabis are known to be emotional). After a long time, Punjab is seen as Punjab. There is no Hindu or Muslim or Sikh or rich or poor. Everyone has come together, including the youth, who were earlier being accused of consuming drugs. The important thing is it has been a peaceful protest,” Jassi told PTI.

“It is about the culture of Punjab and Sikhism that they are feeding those policemen who have lathis in their hands. Punjab is known for making sacrifices,” he added.

The tune can change too.

Singer Jazim Sharma, who hails from Bhatinda and is known for his composition of ghazals with a modern touch recently released a shabad (spiritual song), to bring peace in Punjab on the occasion of Gurpurab.

He said the song "Satnam Da Chakra Firaya" is about peace and positivity in challenging times.

"It's really sad to see what is happening with our kisan brothers. Today is the time when our jawans and kisans are standing against each other which is really disheartening." Others in showbiz are speaking out too.

Actor Manav Vij, who  hails from Ferozpur, Punjab, said he is saddened by the situation.

“The country's soldier is raising his hand against the country's farmer. How did we arrive at a situation like this?

"The issue that our elders have come on the roads means something is wrong,” Vij, best known for his performance in “Udta Punjab” and “Andhadhun”, told PTI.

Bhartiya Kisan Union (Ekta Ugrahan) general secretary Sukhdev Singh Kokrikalan thanked Punjabi artists and singers for standing in solidarity with the protesting farmers against the “black laws”.   “It is a historical fact that artists are very important for the success of any struggle. We hail the singers for standing with the farmers,” he said.

The farmers, who have called for a Bharat Bandh on Tuesday, fear the new farm laws will dismantle the minimum support price system, leaving them at the "mercy" of big corporates. — PTI