Up against quite literally a bully in the ring, Borgohain was completely out-punched by the gold medal favourite 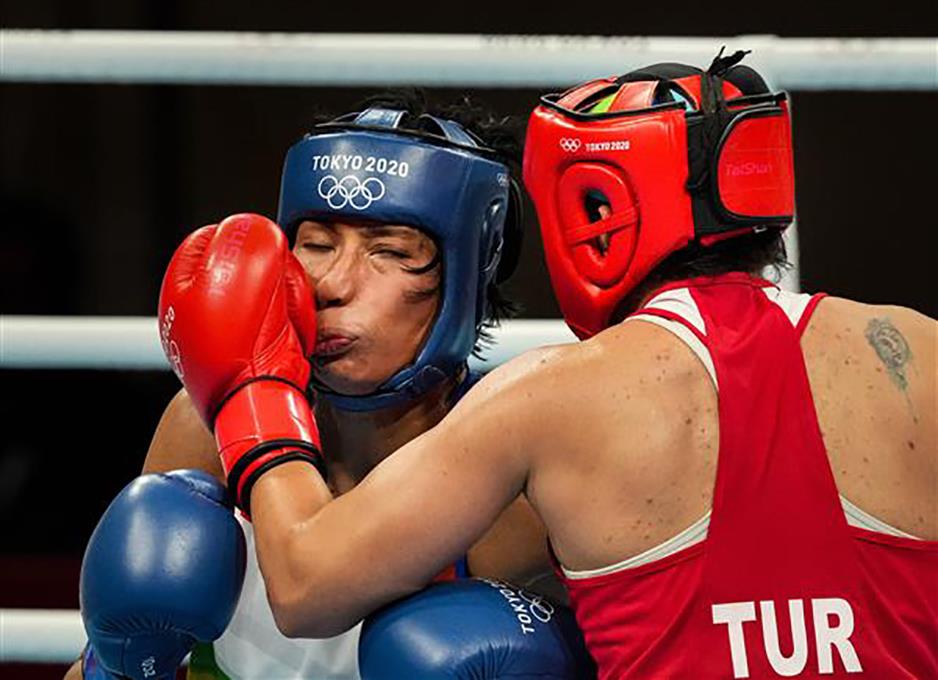 Busenaz Surmeneli of Turkey in action against Lovlina Borgohain of India. REUTERS

Indian boxer Lovlina Borgohain (69kg) signed off with a bronze medal in the Olympic Games after a comprehensive 0-5 loss to reigning world champion Busenaz Surmeneli here on Wednesday, bringing an end to the country's campaign in the sport here.

Heartiest congratulations to @LovlinaBorgohai for winning the bronze medal at #Olympics2020.

Your incredible effort has made our country proud! Wishing you a very bright future ahead.

Up against quite literally a bully in the ring, Borgohain was completely out-punched by the gold medal favourite, who produced a thoroughly dominating performance.

Well fought @LovlinaBorgohai! Her success in the boxing ring inspires several Indians. Her tenacity and determination are admirable. Congratulations to her on winning the Bronze. Best wishes for her future endeavours. #Tokyo2020

The Assam boxer also coped a one point deduction in the second round for not paying attention to the referee's instructions despite a couple of cautions.

The Indian's start was not all that bad as she stood up to the strong challenge but she came undone after Surmeneli got down to connecting her vicious hooks and body shots.

Congratulations to Assam’s daughter @LovlinaBorgohai for bringing home the bronze medal in #Olympics boxing. Your name will be etched in golden letters in the history of Assam. The entire nation is proud of your phenomenal achievement. pic.twitter.com/HbKcXSryGf

The third round was especially punishing for Borgohain, who faced two standing eight counts during the bout.

Nonetheless, Borgohain goes home a history-maker as the 23-year-old, who started her career as a Muay Thai practitioner, has become only the third Indian boxer to ensure a podium finish at the showpiece after Vijender Singh (2008) and M C Mary Kom (2012).

Congratulations to Lovlina Borgohain! With your hard work and dogged determination, you have done the nation proud. Your Bronze medal in boxing at the Olympics Games will inspire the youth, especially young women, to battle with challenges and turn their dreams into reality.

Hers is also the first Olympic medal in Indian boxing in nine years.

Surmeneli is also 23 and has collected two gold medals this year internationally.

The former middle-weight (75kg) boxer claims to have promised an Olympic medal to Turkish President Recep Tayyip Erdogan back in 2015 itself. PTI