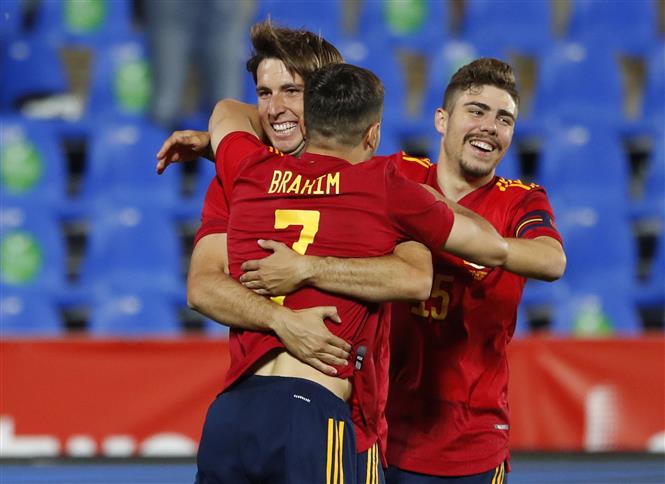 Spain’s group of young debutants beat Lithuania 4-0 in a warm-up match for the European Championship.

The Spain team was made up of players from the under-21 squad, as well as its coach, after captain Sergio Busquets tested positive for Covid. From the 20 players called up for the match, 19 had never played for the senior national team.

The friendly counted as a first-team match, with players getting caps and an official debut for coach Luis de la Fuente with the main squad.

Karim Benzema’s return to international soccer continues to go awry as the France forward limped off injured in his team’s 3-0 victory over Bulgaria.

Benzema had a penalty saved and hit the post last week in his first appearance for France in nearly six years.

He lasted just 41 minutes on Tuesday before being forced off. But France coach Didier Deschamps has brushed off concerns, indicating that it is just a dead leg. — AP/PTI

It seemed ambitious nine years ago when UEFA said it would organise the Euro 2020 in 13 different cities around the continent. It seemed optimistic last year when UEFA decided to stick to a 12-city plan after postponing Euro 2020 when the coronavirus pandemic was declared. Now Euro 2020 will kick off in 11 cities, separated by four time zones and up to 4,700km. Yet the quirky, one-time-only hosting plan looks to be the best result fans could hope for with the coronavirus continuing to limit international travel. Nine of the 11 hosts — all except Azerbaijan and Romania — qualified for the 24-team tournament, giving tens of thousands of fans the chance to see at least two home games. That’s a better outcome than having a single host nation, like France in 2016 and Germany in 2024, which most likely would have had to shut borders to many visiting fans. ap/pti

Netherlands vs Ukraine 00:30am

Italy vs Switzerland 00:30am

Netherlands vs Austria 00:30am

England vs Scotland 00:30am

Croatia vs Scotland 00:30am