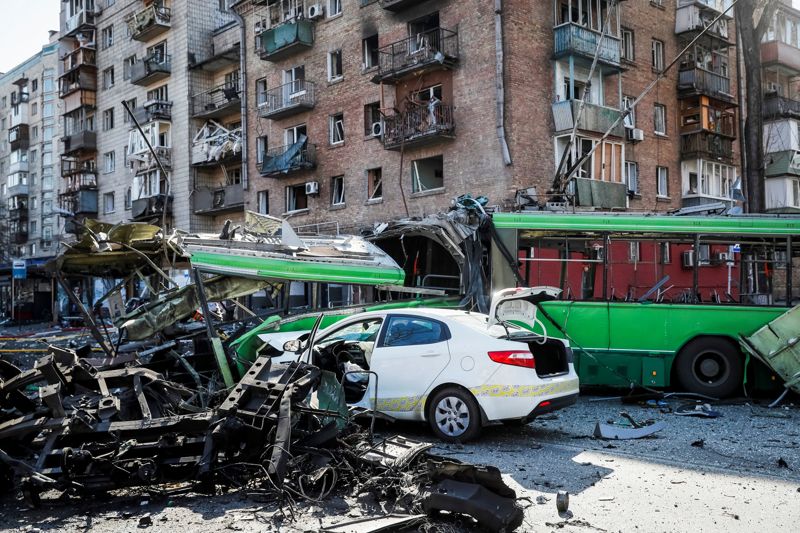 A building and vehicles destroyed in Russian shelling in Kyiv on Monday. REUTERS

The Ukrainian state power company said the power line supplying to the site of the 1986 Chernobyl nuclear disaster has been damaged by Russian forces again.

The Ukrenergo company said on Monday that its technicians had started to supply power on Sunday evening but “before the power supply was fully restored, the occupying forces damaged it again.” Ukrenergo said it will attempt another repair. The power is used to feed pumps and other equipment which keep spent nuclear fuel at the former power plant cool to prevent radiation leaks.

The Chernobyl site is also equipped with diesel generators, and Belarusian authorities said last week that they had set up an emergency power supply from the nearby border.

The International Atomic Energy Agency has played down concerns over the safety of nuclear waste at Chernobyl, saying that cooling ponds there are large enough to keep the spent fuel in a safe condition even if the power supply is interrupted.

More than 2.8 million people have fled Ukraine in the wake of Russia’s invasion, according to the UN refugee agency, the vast majority seeking refuge in Poland which has taken in more than 1.7 million refugees in the last 19 days.

Washington: Top advisers to Presidents Joe Biden and Xi Jinping met in Rome on Monday to discuss China’s support for Russia in its invasion of Ukraine, even as the Kremlin denied reports that it had requested Chinese military equipment to use in the war. The prospect of China offering Russia financial help is one of several concerns for President Joe Biden. AP

Defence ministers from NATO member states will meet in Brussels on Wednesday to discuss the Russian invasion of Ukraine, Turkey’s defence ministry said on Monday.