EXPLAINER: Why is China staging live-fire military drills around Taiwan? 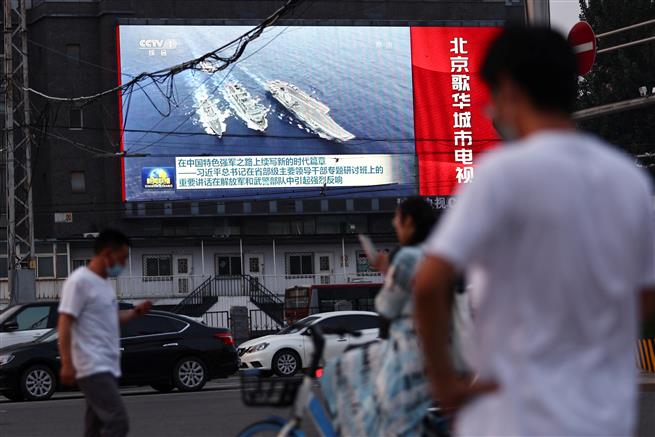 China is staging live-fire military drills in six self-declared zones surrounding Taiwan in response to a visit by U.S. House Speaker Nancy Pelosi to the island Beijing claims as its own territory.

China has warned aircraft and ships to avoid the areas during the exercises, which run through Sunday. The drills appear to be a rehearsal for a potential blockade and invasion of the island that would almost certainly draw in Taiwan’s chief supporter, the United States, along with American allies including Japan and Australia.

China’s 2 million-strong military is the world’s largest and its navy has more ships than the US Taiwan’s armed forces can’t compare in numbers, but it has vowed to resist coercive measures to impose Chinese Communist Party rule over the self-governing island democracy.

“It will take some hard diplomacy to reestablish a stable equilibrium,” said Stanford University political scientist Kharis Templeman. “I don’t know how this confrontation will ultimately play out, but I think we are in for a rocky few weeks.”

The following is a look at the issues surrounding the escalation of tensions:

WHAT IS CHINA DOING IN SEAS AND SKIES AROUND TAIWAN?

China says it has begun exercises involving warplanes, navy ships and missile strikes in six zones surrounding Taiwan. Those lie as little as 20 kilometers (12 miles) off the island’s coast, potentially infringing on Taiwan’s territorial waters. Few details have been given by Beijing, but it has described the drills as punishment for the U.S. allowing Pelosi’s visit to proceed, even though President Joe Biden did not have the authority to prevent her travelling to the island.

Live-fire exercises are a test of a military’s ability to perform missions under conditions most resembling actual warfare. In this case, they are designed to show the level of force China could unleash against Taiwan if Beijing decided to make good on the pledge to seize control of the island and punish those supporting its independence.

The exercises are thought to be the largest and most threatening toward Taiwan since Beijing launched missiles into waters north and south of the island in 1995 and 1996 in response to a visit to the U.S. by then-President Lee Teng-hui. China regularly sends warplanes into Taiwan’s air defense identification zone and has at times crossed the middle line of the Taiwan Strait dividing the sides, but has stopped short of direct incursions or attacks that could spark a regional conflict.

WHY IS CHINA TAKING THESE ACTIONS AND WHAT DOES IT HOPE TO ACHIEVE?

China has increasingly forcefully declared that Taiwan must be brought under its control by force if necessary and in defiance of Washington and other backers of the island’s democracy. Pelosi’s visit came at a particularly sensitive time when Chinese President and head of the armed forces Xi Jinping is preparing to seek a third five-year term as leader of the ruling Communist Party. Xi has named no successor and he’s accumulated vast powers despite criticism of his handling of the economy, partly as a result of his hardline approach to COVID-19 and a marked downturn in relations with the West.

Xi has said Taiwan’s fate cannot remain unsettled indefinitely and U.S. military officials have said China may seek a military solution within the next few years. China’s constitution incorporates Taiwan in its national territory and its 2005 anti-secession law threatens invasion if “possibilities for a peaceful reunification should be completely exhausted,” seen to apply in the case of a formal declaration of independence or foreign intervention.

China insists that Taiwan accept its contention that the island is a part of China, whose sole legitimate government sits in Beijing. In the face of China’s military threats and relentless campaign to isolate Taiwan diplomatically, islanders overwhelmingly support the status quo of de facto independence. That sentiment has been further reinforced by Beijing’s ruthless crackdown on political rights and free speech in Hong Kong, which China has long touted as a model for its future governance of Taiwan.

WHAT HAS BEEN THE RESPONSE FROM TAIWAN AND THE US?

Taiwan has put its military on alert and staged civil defense drills. While its air force, navy and 165,000-member armed forces are a fraction of the size of China’s, they have been bolstered by high-tech weaponry and early-warning systems intended to make a Chinese invasion as difficult as possible. Russia’s invasion of Ukraine, which China has tacitly supported, has also served as a wakeup call to Taipei, which is now looking to overhaul training and tactics.

Numerous U.S. naval and other military assets are currently deployed in areas close to Taiwan, including the aircraft carrier USS Ronald Reagan and its battle group. Washington has comprehensively rejected China’s claims that the Taiwan Strait is sovereign Chinese territory and maintains the right to sail past Chinese outposts in the South China Sea, despite Chinese protests.

WHAT ARE THE RISKS AND HOW LONG WILL TENSIONS PERSIST?

It remains unclear whether China will seek to keep tensions at a high pitch even after the end of the current round of exercises. Spokespeople from the Foreign and Defense Ministries, the Cabinet’s Taiwan Affairs Office and other departments have vowed President Tsai Ing-wen’s administration and the U.S. government will pay a price over Pelosi’s visit, but have not given details on how and when that objective will be achieved.

Following the visit, White House National Security Advisor Jake Sullivan told U.S. National Public Radio that “the possibility of some kind of incident is real,” given the scale of the Chinese exercises.

“And we believe that what China is doing here is not responsible. We believe that it is escalating tensions unnecessarily,” Sullivan said.

The long-standing modus vivendi between Washington and Beijing is being “seriously challenged” by both sides, said Templeman, the Stanford University political scientist.

Washington has pushed back against Beijing with high-level visits, a relaxation of official contact restrictions and arms sales.

“Washington as a whole has become much less concerned about offending China and much less deferential to Beijing’s demands related to Taiwan,” Templeman said. (AP)