The small Mediterranean country is eager to resolve the border dispute with Israel, paving the way for potential lucrative oil and gas deals 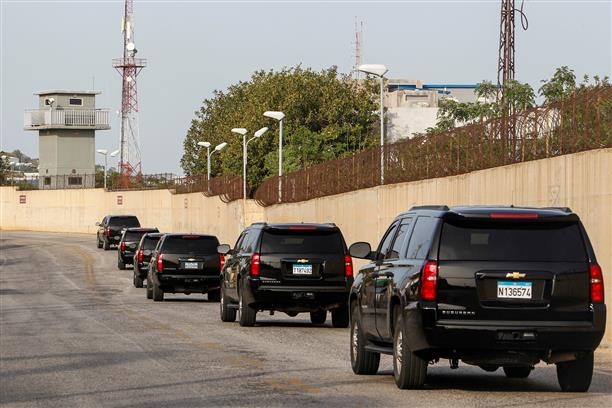 A convoy of vehicles passes from Naqoura ahead of talks between Israel and Lebanon on disputed waters, near the Lebanese-Israeli border, southern Lebanon, May 4, 2021. REUTERS

After a nearly six-month pause, Lebanon and Israel on Tuesday resumed indirect talks with US mediation over their disputed maritime border.

The resumption comes after a new US administration took over.

Lebanon has sunk deeper into it economic and financial crisis that started in late 2019 — a culmination of decades of corruption and mismanagement by the political class.

The small Mediterranean country is eager to resolve the border dispute with Israel, paving the way for potential lucrative oil and gas deals.

Local media said the talks resumed at a UN post along the border known as Ras Naqoura, on the edge of the Lebanese border town of Naqoura. The Lebanese delegation will speak through UN and US officials to the Israelis.

American Ambassador John Desrocher, who serves as the US mediator, arrived in Beirut Monday night to take part in the talks.

The US has been mediating the issue for about a decade, but only late last year was a breakthrough reached on an agreement for a framework for US-mediated talks. The talks began in October but stopped few weeks later.

Israel and Lebanon have no diplomatic relations and are technically in a state of war. They each claim about 860 square kilometers (330 square miles) of the Mediterranean Sea as being within their own exclusive economic zones.

In the second round of talks, the Lebanese delegation — a mix of army officers and experts — offered a new map that pushes for an additional 1,430 square kilometers (550 square miles) for Lebanon.

Lebanon's leadership is not united behind the army command's decision regarding the extended area.

“There is weakness in the Lebanese stance and it is important for the Israelis to join the talks when Lebanon is in a weak position,” said Laury Haytayan, a Lebanese oil and gas expert.

Israel already has developed a natural gas industry elsewhere in its economic waters, producing enough gas for domestic consumption and to export to Egypt and Jordan.

Lebanon, which began offshore drilling earlier this year and hopes to start drilling for gas in the disputed area in the coming months, has divided its expanse of waters into 10 blocs, of which three are in the area under dispute with Israel.

Israel and Lebanon also held indirect negotiations in the 1990s, when Arab states and Israel worked on peace agreements. The Palestinians and Jordan signed agreements with Israel at the time but Lebanon and Syria did not. (AP)